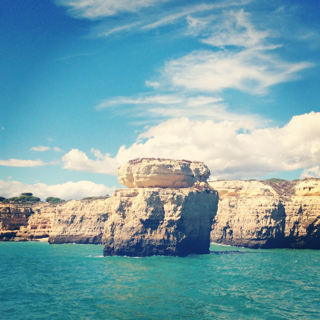 Jesus didn’t leave His body behind. Nor did He get rid of it. The Incarnation wasn’t just a temporary thing: Christ is still fully God and fully Man. So, in the ascension it was the God-Man, the Incarnate Christ, who was taken up into heaven. And so now in heaven we have ‘one Mediator between God and man, the Man Christ Jesus’ (1 Tim. 2:5).

Jesus didn’t just disappear into the clouds; He went to heaven (Luke 24:51; Mark 16:19; Acts 1:11). It wasn’t simply the end of His earthly ministry, but the beginning of the Incarnate Christ’s heavenly ministry.

And it wasn’t just about a change in location. On the day of Pentecost, Peter spoke of the Ascension in terms of Jesus being ‘exalted to the right hand of God’ (Acts 2:33). Paul writes of the Ascension as Christ being ‘received up in glory’ (1 Tim 3:16). Thus, at the Ascension, Christ not only went up from earth to heaven, but He also arrived in heaven in a state of exaltation and glory. As God, Christ had enjoyed glory and exaltation with the Father even ‘before the world was’ (John 17:5), but then He had not been the God-Man. The Ascension involved the exaltation of Christ Incarnate.

Assurance of Our Ascension

We don’t normally talk about the Ascension of believers, yet the Bible does teach that, at the return of Christ, living believers ‘shall be caught up … in the clouds to meet the Lord in the air. And thus we shall always be with the Lord’ (1 Thess. 4:17). Jesus Himself linked His Ascension with His coming again to catch up believers to Himself, saying ‘if I go and prepare a place for you, I will come again and receive you to Myself; that where I am, there you may be also’ (Jn 14:3).

Baptism in the Spirit

Head of the Church

The apostle Paul links Christ’s Ascension with His Headship of the Church (Eph 1:20-23). Thus the Ascension is of benefit to the Church here on earth, for through it we have the Lord Jesus Christ for our Head.

The Ascension did not only result in Christ’s Headship of the Church, but also in His gift of men to the church.


“ When He ascended on high,
He led captivity captive,
And gave gifts to men.”

(Now this, “He ascended”—what does it mean but that He also first descended into the lower parts of the earth? He who descended is also the One who ascended far above all the heavens, that He might fill all things.)
And He Himself gave some to be apostles, some prophets, some evangelists, and some pastors and teachers, for the equipping of the saints for the work of ministry, for the edifying of the body of Christ (Eph 4:8-12).

Thus we see another great benefit to the Church from the fact that Christ has ascended: Christ gives ministry gifts to the Church.

We have Ascended in Him

So there you go, just a few quick reasons for the importance of the Ascension. So hopefully this Ascension Day you have a few reasons to give thanks for Christ's mighty Ascension.
Labels: Ascension Christology doctrine Jesus Tenets theology Wednesday Words