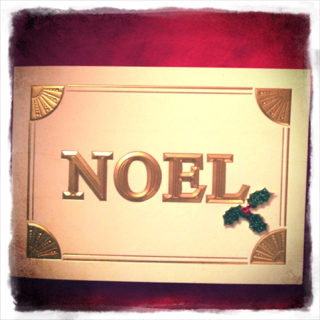 Today it's the third day of Christmas, when we celebrate the Incarnation of God the Son, the fact that "the Word  became  flesh and dwelt among us, and  we beheld His glory, the glory as of the only begotten of the Father, full of grace and truth" (John 1:14).

Sometimes we're tempted just to think of the Incarnation as a prelude to the Cross, and while, yes, it's true, we can't separate the two, neither should we forget the importance of the Incarnation in it's own right. So, at this Christmastide, here's what Irenaeus and Athanasius (two of the great church fathers) had to say about the Incarnation, which may sound a bit odd to us today, along with a modern worship song and a few verses from Peter that might help us see what the fathers meant.


The Word of God, our Lord Jesus Christ, who did, through His transcendent love, become what we are, that He might bring us to be even what He is Himself. (Against Heresies, Book 5, Preface)

He became what we are that he might make us what he is. (On the Incarnation, 54)

Radiant light of heaven, ever-cherished Son,Knowing such perfect closeness, with your Father one;Jesus, you came to us, to share all that was yours.
Our God is good! He's shown such love.Now adopted in the Son, to you we come(Fountain of Goodness)

Grace and peace be multiplied to you in the knowledge of God and of Jesus our Lord, as His divine power has given to us all things that  pertain  to life and godliness, through the knowledge of Him who called us by glory and virtue, by which have been given to us exceedingly great and precious promises, that through these you may be partakers of the divine nature, having escaped the corruption that is in the world through lust. (2 Peter 1:2-4)

What did Irenaeus and Athanasius mean about us becoming what He is? To 21st century evangelical ears that might sound a bit odd. Jesus is, after all God! And so to our minds it begins to sound a bit like some other religion where people become gods. (In fact, some of the church fathers' language seems even more direct about that!) Surely this is all begining to sound a bit dodgy?

Not really.  2 Peter 1:4 helps us see that the fathers weren't talking about us turning into little gods, but about something altogether more biblical. Peter writes about us being "partakers of the divine nature".  And what he's talking about must be biblical, because it's in the Bible that he writes it.

Perhaps 2 Peter 1:4 is an uncomfortable verse for some. It probably would sit awkwardly if you thought of God as a Monad. But who is the God that Peter is  (and Irenaeus and Athanasius are) talking about? The Triune God! And that makes what they're saying much more comprehensible.

You see, if God were a Monad, partaking in the Divine nature would mean being made of the same stuff as him; so that would either mean becoming part of him, or a beginning to polytheism. But, because God is Triune, His nature is to eternally exist is loving relationships. His nature is outgoing loving fellowship.

And when we're brought into that ongoing loving fellowship of the Trinity, that doesn't mean we're absorbed into God and lose our identity; nor does it mean we're transformed into little gods. The reality is much better than that.

Now, seeing what Peter was saying, what were Irenaeus and Athanasius saying? What does it mean that 'He became what we are that He might make us what He is'? Well, what is He? He is the well beloved Son of the Father. He is the Anointed One of the Spirit. And that's what He makes us.

God the Son became a man so that we could be taken out of Adam and united instead to Christ as head of a new humanity. In Him we are sons in the Son. In Him we are adopted into God's family as well beloved children. In Him we are anointed with the Holy Spirit. In Him we are brought into the loving fellowship of the Trinity. 'He became what we are that He might make us what He is.' Or, in the words of Olly Knight and Mike Reeves:

Jesus, you came to us, to share all that was yours.Our God is good! He's shown such love.Now adopted in the Son, to you we come