A Tale of Two Texts 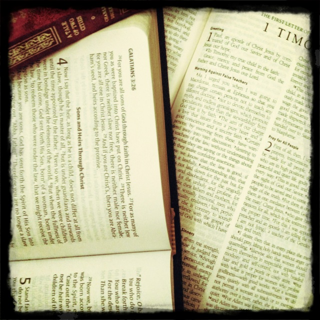 I was writing on Wednesday about complementarianism, and so, having been told off by one of my deaconesses this morning for my lack of biblical explanation, I want to return to the matter today and look at a wee bit of what the Bible has to say.
Thousands of pages have been written on the complementarianism vs. egalitarianism discussion, so I certainly don't intend to thoroughly exegete every relevant text here. And I don't particularly want to get bogged down in this discussion, so intend to keep it to just one post. So what I do want to do is simply say a little bit about two key texts in the debate: one often focused on by egalitarians, and one often focused on by complementarians. And then I'll leave you with a few links to more in-depth resources.
Equal — Galatians 3:28

This verse has almost been made into a proverb by some within the egalitarian camp. It has been printed on placards, quoted in the media, and fairly widely bandied about. But what does it actually mean?
You see, the problem with bandying verses about as proverbs (unless, of course, they actually are proverbs), is that the verse is wrested out of its context. Paul didn't leave us a post-it with a slogan, but rather a whole letter to the Galatians, dealing with some issues of the utmost importance; and this verse finds its place right in the midst of that.
The issue Paul's dealing with in Galatians is justification by faith. Throughout the letter he's making it clear that Gentiles don't need to become Jews (get circumcised and keep the law) in order to become Christians. In Galatians 3 Paul looks at the role of the law: how it wasn't given to save, but to show us our need of Christ for salvation, and Galatians 3:28 forms part of his concluding paragraph to that argument.
The verse in question gives an explicit reason why there is “neither male nor female”, namely because we “are all one in Christ Jesus”. But in the preceding verses Paul has explained a bit more about what he means by that. In verse 27 he clarifies that “as many of you as we're baptised into Christ have put on Christ”, and even before that in verse 26 he explains that being “in Christ” is “through faith” and results in us being “sons of God”. Not children (although elsewhere we are called children of God), but “sons”.
Sons in the first century Roman world had legal rights of inheritance which daughters didn't, so Paul's not being sexist by calling all Christians sons, but rather pointing out that we all share in the same privileges and inheritance. Then two verses later he says that, in Christ, “there is neither male nor female”, clarifying the point he's just made; the privileges and inheritance we have in Christ do not differ according to gender. Men and women, boys and girls all share in the same salvation. We are saved in the same way and saved into the same standing in the same family. All the saved are sons of God. And in this context, sonship isn't about gender, but about rights and privileges; in that world, a son (with legal rights and inheritance) was different from a child.
So yes, very clearly this passage teaches equality between men and women. But, that doesn't mean that it teaches that all distinction ends between the two. The distinctions the context is dealing with are distinctions to do with salvation. Paul is arguing that all are saved into the same salvation. He's arguing that believing Jewish men aren't any more saved than women or Gentiles.
But what he's not saying is that men cease to be men or that women cease to be women. What he's not saying is that this verse is a magic wand to wave over verses that teach distinctions in the role of men and women. (Remember, Galatians was the first of Paul's epistles, so when he has already written this long before he writes to Timothy.)
And he can't be saying that role distinctions between men and women cease after salvation. If he were, this wouldn't just be relevant to eldership, but to marriage as well. This verse simply doesn't mean that men cease to be men or women cease to be women.
So, Galatians 3:28 does indeed teach equality: equality of salvation, equality of value, equality if inheritance and privilege. But it doesn't negate all distinction.
Different — 1 Timothy 2:12

I do not permit a woman to teach or to exercise authority over a man; rather, she is to remain quiet. (1 Timothy 2:12 ESV)

Paul had already written Galatians 3:28 when he wrote this. That means he writes it in the full knowledge of the equal standing and worth of men and women in Christ. That means his prohibition on women teaching or exercising authority (notably, the two distinctives of eldership) is not based on some discriminatory or sexist attitude toward women.
So why does he write it? Well, again context is key. He tells us exactly why in the next verse, which is clear as it begins with the word “for”. “For Adam was formed first,  then Eve” (1 Timothy 2:13 ESV). The distinction in roles in the church is based on God's work of creation. God created Adam first to be there in order to care for Eve and He entrusted His Word to Adam to teach it to Eve. The distinction in roles isn't anything to do with hierarchy or inferiority; it's to do with reflecting the way God created.
So why then does Paul go on to write, “and Adam was not deceived, but  the woman was deceived and became a transgressor” (1 Timothy 2:14)? Some people immediately want to shout, “see, Paul must have been sexist!”. But, note two things. 1) Scripture is the inerrant and authoritative Word of God. You can't just claim Paul is sexist and ignore what the Bible says. And, 2) reading this as sexist is misreading what Paul is saying. He's not saying women are much more gullible than men, but rather he's giving an example of the breakdown of the pattern of gender roles which God established. (Remember, this is the same Paul who is very clear about blaming Adam rather than Eve for the fall and for our sinful nature - Romans 5:12-21).
One more thing about this verse. The context here is the gathering of the church. Women are not forbidden from teaching altogether. Neither are they forbidden from having authority together. Rather this is in the limited context of men and women together in church. Elsewhere we see examples of women teaching in other contexts. So this is not a prohibition on the ministry of women; the New Testament is very clear that there are many significant and important ways that women are to be fully involved in ministry in a large variety of other contexts.
So, 1 Timothy 2:12 is a command of Scripture rooted in the way in which God created us. And it shows that, while men and women are fully equal in their salvation, and in the privileges and inheritance which they have in Christ, their are differences of role within that equality.
So there it is in a nutshell; complementarians believe that men and women are equal but different.
If you're interested in investigating the issues in more depth, I recommend the book Recovering Biblical
Manhood and Womanhood, edited by Wayne Grudem and John Piper, which you can even download as a free PDF. For a a concise but clear summary statement of what Complementarians believe about manhood and womanhood, have a look at the Danvers Statement.
Labels: Bible church contemporary issues doctrine ministry New Testament theology