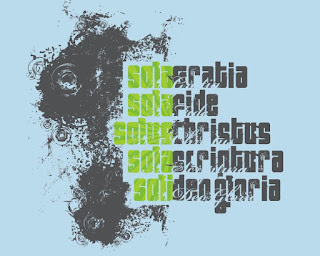 Some people are probably tutting at me already. Why would I say such a thing? It seems that the Protestant label is being more and more eschewed by Pentecostals. Yet Pentecostals are Protestants. They always have been, and I hope they always will be.
You see, being Protestant isn't about a label. It's about theology. Protestant theology is the theology of the Reformation (even though some 'protestant' churches no longer hold to true protestant theology, and thus today we often have to specify that we're evangelical protestants). Being Protestant is about holding to the 5 Solas of the Reformation.
These five points which define what it means to be Protestant show us that we should not be ashamed of our Protestant heritage, because it's all about the Gospel.
Having grown up in Northern Ireland where 'Protestant' is often turned into something other than a theological description, I can understand when some who are Protestant by theology prefer not to make a big deal of the label. It's not the label that's most important, but what that label represents. I've just preached a series of sermons on the 5 Solas and don't think I used the word Protestant once, simply for that reason; it's the doctrine, not the label that's important.
But we must hold onto the doctrine. It seems some in the Pentecostal academy are heading in a different theological direction. Douglas Oss was already beginning to warn of this danger over a decade ago (Douglas Oss, in Wayne Grudem, ed., Are Miraculous Gifts for Today? Four Views, p.316). At that time Oss was most concerned about Sola Scriptura, but today it seems that even Sola Fide and Solus Christus have come under attack. Having first eschewed the Protestant label, it seems some are now moving on the eschew Protestant theology.
But this is no small matter. The heart of Protestant theology is the Gospel itself. It centres on the uniqueness of Christ and the grace of God in salvation. That's the heart of our faith. In the words of David Wells, we need 'the courage to be Protestant'.
Labels: academic church ministry Pentecostal theology