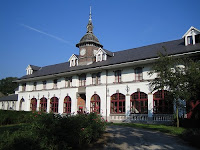 After a hard fortnight of exams, today was the first day of the Spring semester for our students at CTS.  So, I thought today would be a good day to post a few thoughts on seminary.
I teach at seminary, so obviously I think seminary is important. I also studied theology at both a secular university and at seminary. So I've experienced both sides of the lectern. The longer I've been involved with seminary life, the more I'm convinced of its importance.
Yet, some Christians are not so enthralled by the idea of seminary, claiming that is an unbiblical way to train ministers.  While it is true that the Bible does not describe blackboards, classrooms, lecterns, dorms, faculty meetings, etc., it does, however, provide the model that undergirds the idea of seminary.
Acts 19:9-10 gives us a biblical example of the philosophy behind the idea of seminary or Bible College, for Paul, we are told

withdrew the disciples, reasoning daily in the school of Tyrannus. And this continued for two years, so that all who dwelt in Asia heard the word of the Lord Jesus, both Jews and Greeks.

The important thing here is not that the word 'school' is used; that was simply the location. What is important here with regard to the idea of seminary is that Paul taught the Scriptures daily to a group of believers for two years, and as a result the Gospel spread throughout the region.  It was not simply from Paul's preaching that the whole province of Asia heard the Word of God, but also from the preaching of those whom he trained. We can see an example of this elsewhere in the New Testament; it was Epaphras, not Paul who took the Gospel to Colossae and, it would seem, to Laodicea & Hierapolis as well (Col 1:6-7; 4:12-13). Now, Colossae, Hierapolis and Laodicea were all in the province of Asia, therefore they are included in the statement in Acts 19:10; the preaching of the gospel by Epaphras and the establishment of assemblies in these towns was a result of Paul's daily teaching in the school of Tyrannus. In effect, we see the 1st century equivalent of a seminary; Paul taught men the Scriptures, and then they went out to preach the gospel. That's exactly what seminary is all about. Students come together to study. They are taught daily for a number of years. We teach them the Scriptures; how to read the Scriptures, how to interpret the Scriptures, the doctrines of the Scriptures, and how to preach those Scriptures. Then, when the students have learnt the Scriptures, the aim is that they would go out and proclaim the Word of God, just as Epaphras and the other students in Ephesus did.
So, the concept of seminary is in fact a very biblical concept indeed, and one which, in New Testament times, was used of God in the spreading of the Gospel.
We pray that it would be used as mightily of God today!
Labels: CTS evangelism random musings seminary