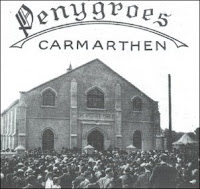 I've been over in Penygroes for the last 4 days to do a bit of research. The village was white due to all the snow they've been having over in the UK, so it was beautiful, but cold.  For those of you who don't know, the picture in the title of my blog is of the convention crowds outside the Apostolic Temple in Penygroes, during one of the annual International Apostolic Conventions which took place in the village every August (recently they've moved to Swansea and are now known as AblazeUK).  Although originally built to house the convention, the Temple was soon too small and a convention hall was built in the 1960s. The Temple is now home to the Penygroes assembly: the original assembly of the Apostolic Church. The Temple is the only building in Wales dedicated to the memory of the Welsh Revival of 1904-1905, and such Apostolic pioneers as D.P. Williams and W.J. Williams (among others) are buried in its graveyard.

On Sunday evening I went up with the students from the Bible College (the Apostolic Church
School of Ministry) to worship in the Temple. The Temple youth were taking the meeting and 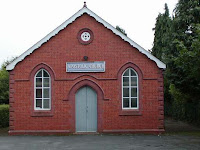 did it really well. On the Lord's Day morning I went down to Ammanford assembly for the Breaking of Bread, where I had the great
privilege of hearing Ps. E. H. Williams preaching from Eph 3&4. Around the Lord's Table and from the pulpit, Ps. Williams reminded us of the importance of God's Eternal Purpose.
I also had another great (& unexpected) privilege in Penygroes, by

being asked to teach a class in the Bible college on Preaching from the Old Testament on
Monday
morning. I really enjoyed it (and I hope the students did too).
On a completely different note, I think it is important to point out that, as of Sunday night, I am the reigning Ludo champion of the Bible college; although the students have promised to defeat me on my next visit!
Labels: Apostolic Church D.P. Williams Eternal Purpose Penygroes random musings W.J. Williams