Pleading the Blood: A Positive Pentecostal Proposal for the Breaking of Bread during the Lockdown 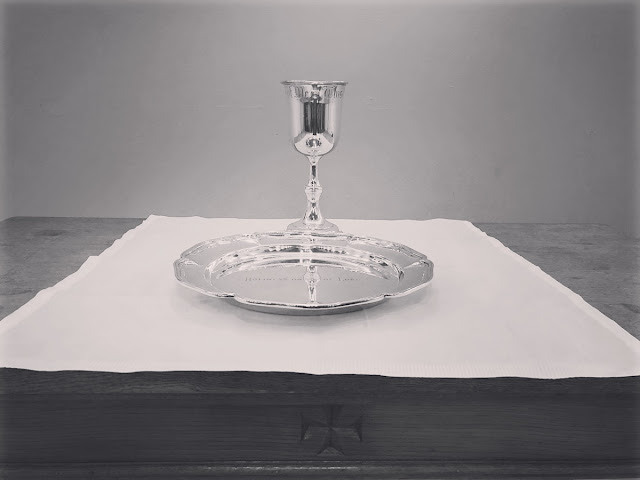 Since my last post, the Communion debates have continued. The most significant posts on either side have probably been Brad East, Assistant Professor of Theology at Abilene Christian University, Texas (against) and Stephen Holmes, Senior Lecturer in Theology & Principal of St Mary’s College, University of St Andrews (for: part 1; part 2). But I’m not going to go back to the arguments of others now today, as I promised a positive Pentecostal proposal this time.


The Centrality of the Breaking of Bread

Elim’s Percy Brewster pointed out that ‘the first and foremost reason’ that the Breaking of Bread stands at the centre of Pentecostal worship is because it ‘was planned and instituted by Christ Himself.’ This is the difference between the Supper and other aspects of our corporate worship. Singing may be good, but Jesus Himself told us to break bread. ‘The ways and thoughts of the Almighty God are higher than ours,’ wrote Brewster, ‘and for this reason alone – that it was planned in the wisdom of God – we should be inspired to attend for the Breaking of Bread each Sunday morning.’ In fact, Brewster went on to very bluntly argue that the Breaking of Bread wasn’t handed over by Christ to the Church ‘to choose whether they wanted it or not. It was a command and it does not leave any believer an option.’ For Brewster (a very significant British Pentecostal leader, and representative of most early British Pentecostals), not to attend the Breaking of Bread would be ‘rebelliously disobeying a direct command of the Lord Himself.’ The Breaking of Bread, then, is not simply a preference for Pentecostals, but rather the divinely ordained pattern for Christian worship.

But, coming to the Lord’s Table wasn’t just seen as a duty, but a joy. The Table is the place of divine intimacy, and so, Brewster writes, when you miss it, ‘you have missed something that you can never regain.’ Although this intimacy and communion with Christ is especially found in the eating and drinking of the sacrament, it is not limited to the eating and drinking. Not only are believers fed with Christ in the bread and wine of the Supper, but they also know the glory of Christ as the host of the meal. In the Supper, Christ is present to give ‘flashes of light and revelation from the heart of God.’ As W.A.C. Rowe put it:

Christ, bearing the marks of the cross, is there to greet and walk with us, granting us an every-increasing knowledge of Himself … The beam of glory, which has broken through the cross, shines onward to the ages to come … Vividly He is seen as the Crowned Saviour presiding at His own festal board.


The Breaking of Bread is the place where the wonder of Christ’s sacrifice is displayed and proclaimed, and so at the Breaking of Bread, as Brewster writes, ‘with deep gratitude we … come back to the Cross and allow ourselves to be broken before Him, and if any Spiritual pride has crept in unawares … it will surely be driven out as a result of that awesome sight of the only begotten Son of God dying with the burden of the sins of the world on His shoulders.’

So, something important and powerful happens at the Breaking of Bread, even beyond our feeding upon Christ in the bread and wine of the Supper. For Pentecostals, the Breaking of Bread isn’t just an object lesson to jog our memories about the past (which we could do some other way), but neither is it just about the eating and drinking. There is something powerful in the memorial part of the sacrament.

From the earliest days of Pentecostalism, ‘pleading the blood’ was an important part of British Pentecostal spirituality. I was teaching my 2nd year students about this a few weeks ago, and they were quite shocked at how this started out with people simply calling out the word blood over and over again. But very quickly the Pentecostal understanding of pleading the blood deepened beyond a mere word. As Alexander Boddy wrote all the way back in 1909, they ‘learned to plead the blood – not by repetition of the word “Blood,” but by presenting the atonement to the Father in the power of the Holy Ghost.’

Today we should still, through our union with Christ, present the atonement to the Father in the power of the Holy Spirit. And, I would suggest, that the Breaking of Bread is the chief way in which this takes place.

Now, don’t misunderstand here. This isn’t a new offering. Christ, our Great High Priest, has by His once and for all offering of Himself accomplished a full salvation. It is finished. Yet, now, as our Great High Priest, He ever lives to make intercession for us, pleading the merit of His shed blood before the Father for us. As D.P. Williams put it:

When Jesus was exalted to His Father’s throne … He was appointed and addressed Himself to a new ministry, in order that His redemption work on the Cross should be carried on effectively, to the perfection of His own people. … Christ is the author of our eternal salvation, and is making our salvation effectual within us by His continual ministry on our behalf before the Father.


For D.P. Williams, the Breaking of Bread is a participation in the heavenly High Priestly ministry of Christ. ‘Christ the Priest … ministers to the redeemed … as we gather around the Table of the Lord, deriving from Him the blessings of our redemption.’ So, as we join with our Great High Priest around His Table, it is not we who are lifting up this memorial in our own right as we plead the blood before the Father. Rather, it is Jesus, the Host of the Feast, to whom we are united through faith, who pleads the blood for us at the Table, by presenting the atonement to the Father in the power of the Holy Spirit. And united to Him, we plead the blood in the Breaking of Bread.

When He instituted the Supper, the Lord told us to ‘do this.’ And part of what He told us to do was to eat and drink. And yet, right now, most of us cannot eat and drink. As the church, we can join with the pastors and elders (via the internet) as representatives, as they take bread and wine, give thanks and bless them with Christ’s words. But we cannot join them in eating and drinking. We can know the power of the memorial aspect of the Supper, of the proclamation of the Lord’s death, and of the anticipation of His return, but we cannot know the communion of participation in the bread has been broken and the cup which has been blest (1 Cor. 10:16).

Yet, Christ is gracious and the Holy Spirit works miracles among us. This is where Spiritual Communion comes in. Although we cannot eat and drink, we can long to eat and drink, and for the communion with Christ that comes through eating and drinking. We can long, and we can pray, and thus entrust ourselves to Christ’s grace and the Spirit’s power. The Spirit who works miracles among us, is, after all, the one who glorifies Christ and takes the things of Christ and declares them to us. We may not be able to enjoy the sacramental communion for now, but we can pray that by the Lord’s grace and the Spirit’s Jesus-glorifying, miraculous power, we may know a like communion with Christ by the Spirit, as we join together with the church in the remembrance, thanksgiving, and proclamatory aspects of the Breaking of Bread.

The apostle John, in his exile on Patmos, perhaps gives us an example here. John, like us, was cut off from the gathering of the church. John, like us, could not gather with the brothers and sisters to break bread together. Yet, John ‘was in the Spirit on the Lord’s Day’ (Rev. 1:10). He did not neglect worship on the Lord’s Day just because he could not gather with the Lord’s people. And while he was ‘in the Spirit on the Lord’s Day,’ John encountered the Lord Jesus, the One ‘who lives and was dead, and behold [is] alive forevermore’ (Rev. 1:18). He hears the promise of ‘hidden manna to eat’ (Rev. 2:17) and sees the heavenly hosts gathered in worship around the Lamb who was slain and lives (Rev. 5). For John, by the grace of the Lord and the miraculous power of the Holy Spirit, although he was cut off from gathering with the church to partake of the Supper, he received this gracious revelation of Christ and communion with Him.

My Suggestion for Practice

So, let me sum up my suggestion for practice in this period of lockdown and isolation. As we’ve seen in the last post, I don’t think it would be right for us to turn the Supper into a private devotion, to be practiced in households who eat bread and drink wine in remembrance of Jesus, apart from the church. Nor, however, do I think we need to wait until the entire church can gather to celebrate the Breaking of Bread. Furthermore, I don’t think Remote Consecration is possible. So, where does that leave us?

I hope what I have shown in this post is that there is that the Breaking of Bread has great significance and power even beyond the eating and drinking. Even when we can’t all eat and drink, we still proclaim the Lord’s death, make the remembrance as we plead His blood in union with our great High Priest, and look forward in earnest anticipation to His return. This is not the fullness of the sacrament, but neither is it nothing.

So, my suggestion is that it is a good thing for assemblies to include the Breaking of Bread in their online services (for as we’ve seen, it is utterly central to Pentecostal worship), all the while recognising that many people will not be able to partake. In including the Breaking of Bread, we are called to self-examination and confession, and we make the memorial, the proclamation, and the anticipation of Christ. But I would add one more thing. For, rightly, it seems odd to us that only the pastor would eat and drink. So, I suggest that any other pastors and elders (for they are our presbyters, ordained to the ministry of word and sacrament) join with the pastor as they watch with their households, pray the great thanksgiving prayer in spirit with him, add their ‘amen’, and repeat Christ’s words of institution (either along with the pastor or after him), and so jointly celebrate (concelebrate) the sacrament with him. Thus, the pastors and elders and their households break bread on behalf of the church, and everyone else joins in Spiritual Communion. It isn’t ideal, but it seems to me that this is the closest we can come to gathering to celebrate the Lord’s Supper in the current situation. And in doing this, we entrust ourselves to the grace of the Lord Jesus Christ, the love of God, and the fellowship of the Holy Spirit, trusting in His gracious and miraculous ability to bless even our feeblest attempt at remembrance and proclaiming the Lord’s death together, waiting and longing for that day when we will be able to break our eucharistic fast and join together in the assembly again to eat and drink at the Lord’s Table.

In the meantime, we can pray, in the words of an old Apostolic Church hymn (written by a member of the Albert Street assembly in Bradford):

O Broken Body of the Lord,
O Food and Drink most precious;
Until He Come, Beloved, Adored,
Oh may we wait with patience. 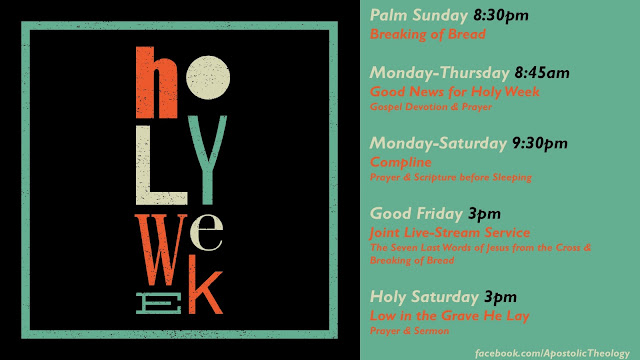