What is Spiritual Communion? 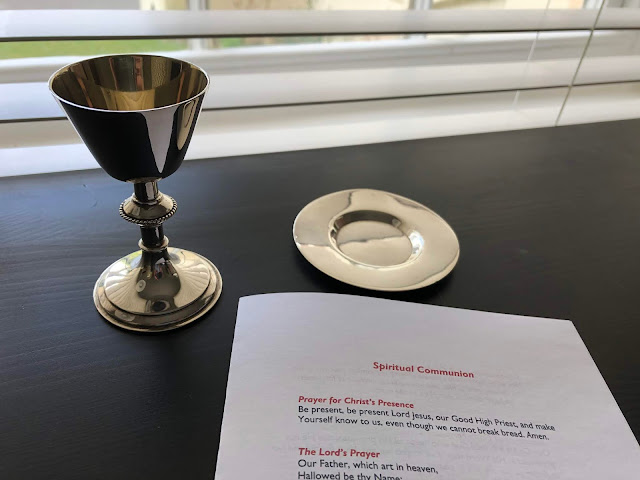 Spiritual Communion is a way Christians throughout the centuries have drawn near to Christ in worship when it hasn’t been possible to meet with Him at His Table in the sacrament of the Lord’s Supper. The traditional definition is, ‘an ardent desire to receive Jesus at His Table and a loving embrace as though we had already received Him.’ It’s not a particular thing that you do, or a special form of words that you say, but rather it’s a sincere longing for communion in the body and blood of Christ when it isn't possible to receive the sacrament physically. This is a spiritual eating by faith. Normally, this sort of spiritual eating should accompany our sacramental eating when we come to the Breaking of Bread. But, when we can’t gather for the Supper, this spiritual eating (although unfortunately and very sadly separated from the sacramental eating) is something that’s still possible for us, by God’s grace and the power of the Holy Spirit, as we long for the day we will be able to feast again at His Table.

Two key Scriptures undergird the practice of spiritual Communion. First, 1 Corinthians 10 tells us of how the children of Israel ate and drank spiritually of Christ during the Exodus and their subsequent wilderness wanderings: ‘All ate the same spiritual food, and all drank the same spiritual drink. For they drank of that spiritual Rock that followed them, and that Rock was Christ.’ (1 Cor. 10:3-4)

Second, in John 6 Jesus speaks of both the sacramental eating and the spiritual eating. In this chapter, Jesus starts off by speaking about a spiritual eating by faith. ‘I am the Bread of Life. He who comes to Me shall never hunger, and he who believes in Me shall never thirst’ (Jn 6:35). This spiritual eating of Christ by faith brings life (v.40). But from verse 48 onwards, Jesus switches to using much more physical language of eating (even, literally, of chewing) His flesh, which was offered up on the Cross ‘for the life of the world’ (v.51). Thus, here Jesus adds the sacramental eating to the spiritual eating of which he has already spoken. This passage shows us that there are two ways in which we eat Christ’s flesh and drink His blood: spiritually by faith, and sacramentally in the bread and wine of the Lord’s Supper. These two belong together, but when we cannot come to the Table, we will not be deprived of the possibility of eating and drinking by faith (just like the children of Israel), which we call Spiritual Communion.

The practice of Spiritual Communion is closely connected to the celebration of the sacrament. It’s not a replacement for the Breaking of Bread, but rather a gracious provision for those who cannot come to the Supper. Spiritual Communion does not mean saying we don’t need the Supper because we can have communion with Jesus at any time. No! It is an earnest longing for that communion which we know when we eat and drink of the sacrament: an ardent desire to meet with Christ in His body and blood at His Table when we cannot.

That’s why it’s good for spiritual communion to take some form as an act of worship. In these days of lockdown, that might be in the form of watching a livestream of the Breaking of Bread and joining in worship and prayer. At other times it might mean spending some time on a Lord’s Day, when we (for some severe and valid reason) cannot be at church, praying and praising, giving thanks for and remembering Christ’s sacrifice, and expressing to the Lord our longing for communion at His Table.

If you’re watching the celebration of the Supper via a livestream, Spiritual Communion involves a conscious act of spiritual participation at the part of the service where you would normally receive the bread and the wine of the sacrament. You’re not just watching someone else have Communion; you’re participating in it. And so, you should come before the Lord in the same way you would at the Breaking of Bread service: with wonder, reverence, delight, and gratitude.

(For pastors and elders leading a Breaking of Bread service via livestream, it would probably be helpful to leave some time after the Words of Institution for people watching to pray for themselves, or else you could then lead them in a prayer for Spiritual Communion.)


Some Resources for Spiritual Communion


I’ve put together a new form for Spiritual Communion, drawing on Pentecostal sources (a different and simpler one from what I had shared earlier in the week) as it might be of help to you. Here it is as a normal PDF to use on a screen (or this one with bigger text for smaller screens), and here in printable form as a booklet to print on A4 paper.

If you’re joining in a livestream, you might not need that whole form, so here is the new Prayer for Spiritual Communion from it. (I based this on one by Mitchell Lewis, with some alterations and additions from Apostolic Church sources.)


My Jesus, I love you above all things. How I long to receive you with my brothers and sisters at the table you have prepared. But since I cannot at this moment receive you in bread and wine, according to your promise in the sacrament of the Breaking of Bread, I ask you to feed me with the manna of your Holy Spirit and nourish me with your Holy presence. As I embrace You now by faith, grant me a full realisation of Your presence, which is the richest of joys. Never permit me to be separated from your love. Amen.


I’ve also adapted and put together some songs suitable for Spiritual Communion. (These are all either written by Pentecostals or from the British Pentecostal Breaking of Bread hymnbook, Hymns at the Holy Table.) There are also some more modern songs that might be suitable, but for copyright reasons, I haven’t included them. (Perhaps I’ll get some time later in the week to make a list of some.)

(As Pentecostalism is much more of an oral tradition, I’ll try and make a recording of the form for Spiritual Communion and some of the songs as well in the very near future, as those might be more helpful to people than simply PDFs.)

Appendix (for those who are particularly interested): Why Spiritual Communion and not ‘Online Communion’/‘Remote Consecration’?


It’s easy in our technological age to assume most things can be done online. But the sacraments are by their very nature tangible, physical things. The sacrament of the Breaking of Bread does not only involve eating bread and drinking wine. Nor is it enough to eat bread and drink wine while you can hear someone saying Christ’s Words of Institution. Doing this might be an acted out version of Spiritual Communion, but it wouldn’t be Sacramental Communion. Why not? Because there are four necessary things to every sacrament: the matter (bread and wine), the form (Jesus’ Words of Institution), the minister (the pastor or elder), and the intent (i.e. that I really am intending to celebrate the Lord’s Supper, and not just simulate it, like e.g. an actor in a play). In Scripture, what Jesus tells His ministers to do in the sacrament of the Lord’s Supper is to take bread and wine, as well as blessing them with His Words, and giving them to His people to eat and drink (1 Cor. 11:23-25). The bread and wine which are blessed with Christ’s Words, and thus consecrated as the sacrament, are the bread a wine which the minister takes, not bread and wine which are far away and which he doesn’t know about. So, for example, on a normal Sunday, if someone had some bread with them in church that I didn’t know about, it wouldn’t be consecrated when I give thanks over the bread and wine on the Table and speak Christ’s Words. It is only the bread and wine which I have taken, and thus prayed over and blessed with Christ’s Words that constitute the sacrament. So, an ‘Online Communion’ or ‘Remote Consecration’ would leave out the proper intent by leaving out one of the biblical parts of what Jesus told us to do when He said ‘do this in remembrance of me.’ That’s not to limit what God can do in His grace and compassion, but it’s just to say Christ’s ministers are only ‘stewards of the mysteries’ (1 Cor. 4:1) and not masters of them. So, it’s not our place to change the sacrament. While Christ in His mercy can make His presence known wherever and whenever He chooses, He has promised His presence when we gather together at the Lord’s Table. And until that gathering together is possible again, we can long for it and for the communion of Christ we have in the sacrament, through Spiritual Communion.