Of Mystics, Puritans, and Pentecostals 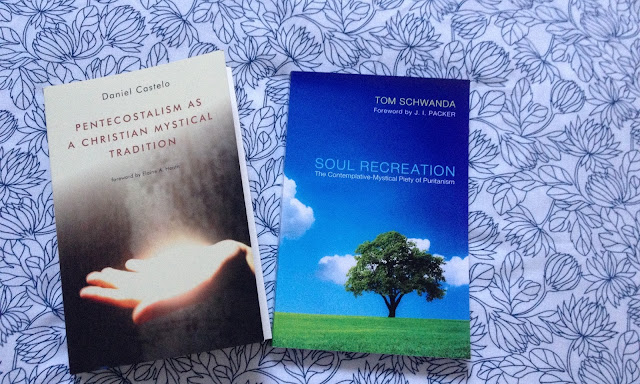 Castelo’s monograph is a highly stimulating and enjoyable academic read. And, as he himself recognises in his Postscript, one which will undoubtedly provoke ‘significant resistance … from a number of quarters and a variety of standpoints’ (p.178). I imagine I would fall into one of those expected quarters of resistance: systematic theology is my subdiscipline, yet he ‘call[s] into question the viability of something called systematic theology.’ And more than that, the very central presupposition on which he bases his work is one with which I have no sympathy whatsoever: according to Castelo ‘Pentecostalism on a number of scores is decisively not a Protestant tradition generally and not part of an amalgam known as evangelicalism particularly’ (p.xiii). Contrary to Castelo, I would argue that a Pentecostalism which ceases to be Protestant and Evangelical thereby ceases to be truly Pentecostal. And yet, despite such fundamental differences, I very much enjoyed Castelo’s work, and I’m sure I’ll interact with it a lot in the years to come.

In fact, it might be in taking a wider view of Evangelicalism that a case for a mystical aspect to Pentecostalism could be strengthened (and rescued from a great deal of the ‘significant resistance’ which Castelo expects). Castelo at several points recognises that Pentecostals themselves are largely unfamiliar with the writings of the mystics and uncomfortable with the language of mysticism. Yet, there is another tradition with its own mystical piety with which British Pentecostals have historically found a great deal of affinity, and whose writings are familiar to (at least all but the most recent generation of) British Pentecostals. What tradition is that? Puritanism!

Tom Schwanda’s book, Soul Recreation: The Contemplative-Mystical Piety of Puritanism (Eugene, Oregon: Pickwick, 2012) provides an academic consideration of the mystical piety of Isaac Ambrose, a Lancashire Puritan of the 17th century. And, in doing so, could perhaps form a useful conversation partner for the conversation about Pentecostals and mystical piety which Castelo wants to open. For in Schwanda’s work (and in Isaac Ambrose’s life and thought) we have an example of a mystical piety which both demonstrates significant parallels with early Pentecostalism, and is at the same time firmly rooted in a Protestant Evangelical identity.

While Castelo critiques Evangelicals for their logocentrism and sees a Pentecostal mysticism as a pneumatic corrective, Schwanda (and Ambrose) provides an alternative, evangelical mystical piety, firmly rooted in Scripture and in the Christ of the Scriptures, and there seeing the work of the Spirit. Schwanda uses Ambrose’s example to demonstrate that Evangelicals do not need to run to other traditions to find a contemplative-mystical piety, but rather, can draw on the resources which already exist in their own tradition. ‘Therefore, the challenge is to recover the lost heritage of piety within [Reformed/Evangelical] theology that itself is certainly not exclusive of patristic and even medieval piety’ (p.245).

Now, perhaps on the North American scene the affinities and connections between Puritanism and Pentecostalism are not so clear as they are in Britain. But lest the North American reader be in any doubt about such an affinity, just have a look at Isaac Ambrose’s descriptions of his experience of 20th May, 1641. Schwanda takes this as a clear example of a mystical experience (p.177). Yet, to a Pentecostal reader, it’s not the mystics which come to mind in reading the three accounts of Ambrose’s experience. Rather, it sounds just like early Pentecostal accounts of the baptism of the Holy Spirit. Here’s one of Ambrose’s own descriptions of what happened:

‘This day in the Evening the Lord in his mercy poured into my soul the ravishing joy of his blessed Spirit. O how sweet was the Lord unto me? I never felt such a lovely taste of Heaven before: I believe this was the joyful sound, the Kisses of his mouth, the Sweetnesses of Christ, the Joy of his Spirit, the new wine of his kingdom; it continued with me about two days.’ (Isaac Ambrose, Media, p.71; cited in Schwanda, Soul Recreation, p.178)


On another occasion, Ambrose writes that that day, when he ‘was carried away in ecstasy and ravishment’ in ‘the unspeakable joy of God’s Spirit’, was when he ‘began to see Spiritual things … upon which followed more desire and endeavours after grace.’

The similarity of Ambrose’s experience to early Pentecostal testimonies is uncanny. And given both the Puritan pedigree (unlike in the United States, British Pentecostalism did not have a Wesleyan background, and most significant early Pentecostal leaders came originally from denominations which traced their roots to the Great Ejection of 1662 and thus Puritanism) and Puritan affinities of British Pentecostalism, this similarity wouldn’t appear to be a mere coincidence. These are kindred traditions, separated by nearly 300 years, but describing very similar experiences in very similar ways.

Yet, Schwanda identifies Ambrose’s experience as a mystical one, demonstrating ‘a contemplative-mystical piety that is every much as rich as that of Western and Roman Catholic devotional writers’ (p.180), drawing a comparison with Teresa of Avila, Bernard of Clairvaux, and Jan Ruusbroec.

For those of you who read academic theology books, I highly recommend Castelo and Schwanda’s monographs. And for those of you who don’t, I’ve heard that there should be a more popular-level introduction to Isaac Ambrose and his piety written by Tom Schwanda coming soon (to which I am very much looking forward!). And of course, in the meantime, there’s always Isaac Ambrose’s magnum opus, Looking Unto Jesus, to give you plenty to read!