Catechesis and Why We Need It (With Catechisms to Help) 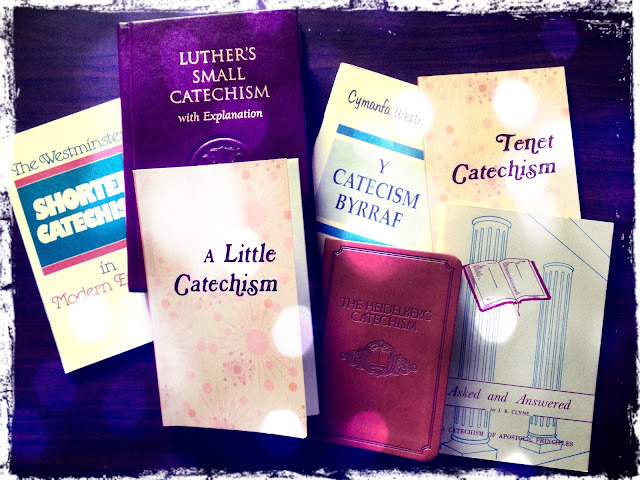 ‘The church of God will never be preserved without catechesis!’ So declared one of the great leaders of the Reformation. The other great Reformer saw catechesis as equally important: ‘Those who are unwilling to learn the catechism,’ thundered Luther, ‘should be told that they deny Christ and are not Christians!’ Perhaps that might all sound rather over-dramatic and a bit of an overstatement to you. After all, most Evangelicals and Pentecostals don't often use words like catechesis. But, if we understand what catechesis is, we’ll see that these are rather biblical statements indeed, and ones which have been proven over and over again in the history of the church.

If we’re to understand the vital necessity of catechesis, then we first need to know what catechesis is. Catechesis means ‘instruction’, and particularly ‘oral instruction.’ In other words, to catechise someone is to sit down with them and teach them the faith. In the earliest days of church history, new converts were known as catechumens and were catechised before being baptised and being admitted to the Lord’s Table. So, when Luther and Calvin made such high claims for catechesis, what they were talking about was teaching the faith, and receiving that teaching. Calvin’s claim was that the church will never be preserved without the faith being taught to new converts and passed on from one generation to another. Luther’s strong words were a warning to people that, if they refused to learn the fundamentals of the Christian faith, then how could they claim to be Christians. Catechesis really is that essential!

Already in the New Testament accounts of the life of the early church we see catechesis in action. Aquila and Priscilla catechised Apollos (Acts 18:26) by taking ‘him aside and explain[ing] to Him the way of God more accurately.’ Timothy was catechised by his mother and grandmother (2 Timothy 1:5 cf. 3:14-15) and by Paul (2 Timothy 1:13). And Paul instructed Timothy to catechise faithful men who would in turn catechise others as well (2 Timothy 2:2). Paul went ‘from house to house’ in Ephesus, teaching the faith and catechising families (Acts 20:20), as had the apostles in Jerusalem before him (Acts 5:42).

In fact, catechising – teaching the faith – is part of Christ’s Great Commission to His disciples (Matthew 28:19-20). And it isn’t something brand new in the New Testament either: instruction in the faith was a central part of an Old Testament walk with the Lord as well (Deut. 6:6-9).

So catechesis is the biblical practice of passing on instruction in the faith from one generation to another. It’s the ‘house to house’ teaching that the apostles carried out in addition to their public preaching (whether it happens now in people’s houses, in church buildings, in coffee shops, or anywhere else!). Catechesis builds up believers in the most holy faith (cf. Jude 20), and patiently teaches the gospel to interested unbelievers.

And catechesis teaches Christians how we live and worship in light of the gospel of Jesus Christ as well. That’s why, traditionally, catechisms have covered not only foundational doctrine (often in the form of the Apostles’ Creed), but also the Ten Commandments and the Lord’s Prayer. This isn’t just a quick bit of minimal teaching to show someone how to get saved, but systematic teaching that builds a gospel foundation for a life of discipleship in Christ.

In the early days of Pentecostalism, the Apostolic Church recognised the vital role of catechesis in passing on the faith from one generation to another and in ensuring that new converts to Christianity became true disciples of Christ. And so they did what the Reformers had done before them and wrote catechisms. In fact, they prepared quite a few different catechisms, for different audiences and with different goals, both in English and in Welsh, because they knew just how important this work of catechesis really was.

It’s been over fifty years since the last Apostolic catechism was produced in English (although the Apostolic Church in other countries, like Italy, has continued in the task of catechism production in the meantime) and it’s been about a decade since the last reprint of the that latest catechism. But the need still continues today.

And so, to help a bit with that need, I’ve put together two catechisms. The first, the Little Catechism, is an introduction to the Christian faith and will hopefully be helpful for discipling new Christians. It starts with God’s Law (in the Ten Commandments) which reveals our sin, then turns to the Gospel (in the Creed), and then on to the life of faith (in the Lord’s Prayer, the Sacraments, and the Baptism of the Holy Spirit). Like most good catechisms, this one builds on the work of those who have gone before it. Most of the answers come from some of the great catechisms of the Reformation: Luther’s Small Catechism, the Heidelberg Catechism, and the Westminster Shorter Catechism, as well as Luther’s Betbüchlein (Little Prayer Book). Anyone who knows these older works will quickly see that Luther has been the biggest contributor.

Like all introductory catechisms, this isn’t a polemical work or one to emphasise denominational distinctives. Rather, it is intended merely as an introduction to the Christian faith. And so, while it does speak of a theme very dear to Pentecostals and charismatics – the Baptism of the Holy Spirit – and raises the opportunity for further teaching on this theme, it does not focus on Pentecostal distinctives.

That’s where the second catechism comes in. The Tenet Catechism is structured around the Tenets of the Apostolic Church and so deals in more detail with Evangelical and Pentecostal themes. In the Apostolic Church, this catechism will be particularly useful for those taking membership classes in preparation for the right hand of fellowship. Like the Little Catechism, the Tenet Catechism draws on previous catechisms, both earlier Apostolic catechisms (including the Hollwyddoreg, the Catechism upon the Tenets, and Asked and Answered) as well as the catechisms of the Reformation and Post-Reformation period (upon which the earlier Apostolic catechisms also drew). Unlike the Little Catechism, it also includes biblical references along with each answer.

The reason the Little Catechism doesn’t include Bible references is that I’m working on more material to help make it more useful. So, at the moment, I’m working on a series of Bible studies which can be used either one-to-one or in small group/house group settings to help pastors and elders who want to use the material in the Little Catechism in a one-to-one discipleship or small group Bible Study setting. I’ll post the studies after they’ve been road-tested a bit more. (My friends and colleagues in the Area Pastors’ Meeting has also been giving me some more ideas for useful catechetical resources, so we’ll see what other ways we can help churches and presbyteries in this vital task of catechesis. And if anyone else has some ideas, or any feedback on the catechisms themselves so that I can make them better, let me know!)

Luther lamented in his day that many pastors were sadly ‘very negligent in this matter [of catechesis] and slight both their office and this teaching.’ Some, he said, were simply lazy and cared more about their own bellies than the Lord’s flock which they were supposed to feed. But others, he warned, neglected catechesis because they thought they were doing something better than something which seems so simple and ordinary. ‘Some neglect the catechism,’ Luther wrote, ‘because of great and high art, giving their mind, as they imagine, to much “higher” matters.’ Heed Luther’s warning! Don’t let yourself think that other things are ‘higher’ or more spiritual than the simple, basic, teaching of the fundamental truths of the Christian faith, i.e. catechism. Catechesis is not glamorous and often demands a great deal of patience. But catechesis edifies ‘the body of Christ, till we all come to the unity of the faith and of the knowledge of the Son of God, to a perfect man, to the measure of the stature of the fullness of Christ; that we should no longer be children, tossed to and fro and carried about with every wind of doctrine, by the trickery of men, in the cunning craftiness of deceitful plotting, but, speaking the truth in love, may grow up in all things into Him who is the head—Christ.’ (Eph. 4:12-15).