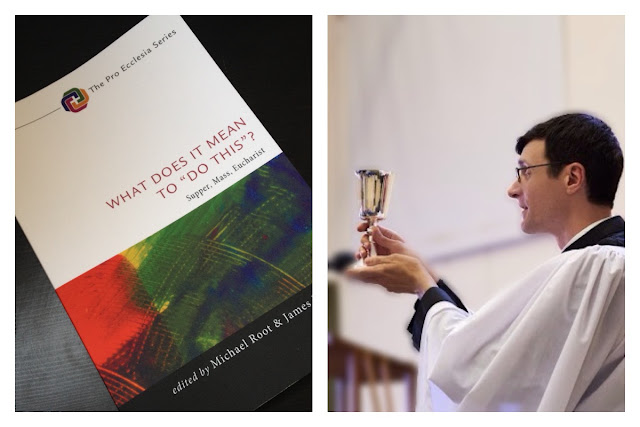 In his essay ‘Communion: A Pentecostal Perspective’ (in Michael Root and James J Buckley, ed., What Does It Mean to “Do This”?: Supper, Mass, Eucharist), Telford Work starts off with a description of Pentecostal Eucharistic practice:

What would you see at a Pentecostal Lord’s Supper? You would see a congregation in pews or chairs – perhaps passing brass platters and cupholders the way I did as a Presbyterian, or perhaps proceeding to the front of the sanctuary at their own family or individual initiative to dip a morsel of bread into a cup of grape juice. You would hear a worship band playing contemplative hymns – or perhaps slow, amplified stadium-rock worship songs, or perhaps celebratory gospel – with some of the congregation singing along. You would see quiet, reflective expressions on churchgoers’ faces, and you might pick up the sounds of prayers muttered so quietly that you couldn’t tell whether or not they were in tongues. You would probably hear the words of institution, though you might not. It might happen monthly or quarterly, though in a growing minority of churches it happens weekly. You would definitely no hear an elaborate or drawn-out Eucharistic rite. And you would have five to ten minutes to take all this in before the service was quickly concluded and the congregation moved on to our real sacrament: coffee. (p.121)


This is a description of Pentecostal worship from the perspective of a theologian living in California, although he tells us he’s been to services like this in Chiang Mai and Strasburg as well.

But it’s nothing like classical British Pentecostal Eucharistic practice (nor that of countries where there was a significant British, rather than American or Scandinavian, missionary input to the local Pentecostalism).

While the Californian description is of 5 to 10 minutes tacked on to the end of the service 4 to 12 times a year, the classical approach in Britain was for the main service of a Pentecostal church to be “the Breaking of Bread” each and every Lord’s Day. And in a classic Breaking of Bread service, the whole meeting was really an extensive Eucharistic rite: everything in the service flowed (or at least was supposed to flow) to or from the Table.

In California they might pass round ‘brass platters and cupholders’, but at a classic British Pentecostal Breaking of Bread, you’d be much more likely to see a silver chalice and paten (probably engraved with the words ‘Holiness to the Lord’). Instead of a worship band playing, in the tradition I come from, the distribution always takes place without music (which, I always thought was to do with not distracting communicants from their communion with Christ, but I’ve only recently learned was originally to leave room for the Lord to speak, whether to the hearts of individuals, or prophetically to the assembly). You’d also definitely hear the words of institution.

And on this side of the Atlantic you’d even hear words of absolution after a silent period of self-examination before coming to the table (although you’d probably never hear a word like ‘absolution’ itself – the absolution would usually be pronounced in Scriptural language). In American Pentecostalism, on the other hand, ‘prayers and confessions are typically sung [in the form of worship songs] as the elements are distributed’(p.123).

In California, ‘the liturgical consummation of a service is often a call to commitment or recommitment, often delivered as the conclusion of the sermon’, an adaptation of ‘the classic [American] evangelical “altar call” as a time for people to sit prayerfully or come forward, not just for salvation, but for baptism in the Holy Spirit, deliverance and liberation, healing, or intercessory prayer’ (p.123). But in classic British Pentecostalism, it was the Breaking of Bread which was the liturgical consummation. Healing was to be found in the Christ offered to believers at the Table. Early British Pentecostal literature had plenty of testimonies of people who were healed ‘while feasting on the Lord Jesus’ at the Table. Older Pentecostals in Britain and on the Continent have told me of how, when they were young, people wouldn’t have dreamt of asking for prayer for healing on a Sunday morning, because it was the Breaking of Bread, so they would just come to Christ at the Table. Gospel appeals would be made in the evening at the Gospel Service and at other times, but there would never be anything resembling an “altar call” at the Breaking of Bread service.

Even the furnishings of Californian and classic British Pentecostal churches might differ due to our differing eucharistic practices. Over there, ‘congregational attention focuses on a central lectern or pulpit … backed by a choir or praise band’ (pp.122-123), while the communion table might be off to one side or may even ‘be removed during weeks without the Lord’s Supper’ (p.123). Here, however, the Pentecostal tradition was always to have both the pulpit and table at the centre, with attention focused equally on Word and sacrament. And the Breaking of Bread service would always be conducted from the Table. (The story goes that one particularly animated, but unobservant, preacher at the Easter Convention, flung his arms about so much during his sermon at the Breaking of Bread service that, because he was preaching from the table rather than the pulpit, he managed, without realising, to knock over the chalices under the veil on the table in front of him. The horrified deaconesses saw the red wine filtering through the while veil and the fair linen and then crawled to the table to try and reset it in time for the sacrament without distracting the congregation from the preaching. However, crawling deaconesses changing wine-stained cloths and resetting the communion table was a very hard thing not to notice, which is why the story has been handed down as far as me today!)

Why do I bring up these differences? Well, it’s because so often published accounts of Pentecostal faith or practice are rather America-centric. Then people in Britain, or other countries, read them and assume that, because we’re all Pentecostals, the American tradition must be ours too. (So, for example, people often tell me, having read something like Dayton’s Theological Roots of Pentecostalism, that “we” have our roots in Wesleyanism and so we’re Arminians – even though the Apostolic Church’s roots were actually in Welsh experiential Calvinism!) And already, the American low eucharistic practice is making significant inroads on this side of the Atlantic. So, I just want to remind people that our tradition is very different (as is our accompanying eucharistic theology!). While in California, the Lord’s Supper ‘may be the act that most directly resembles Pentecostalism’s mother traditions’ (p.121), a classic British Pentecostal Breaking of Bread is one of the distinctives which most distinguished Pentecostalism from (most of) its parent evangelical movements. As Walter Hollenweger, the father of Pentecostal Studies, put it from a European perspective, ‘the service of the Lord’s Supper is the central point of Pentecostal worship. It is as it were the holy of holies’ (Hollenweger, The Pentecostals, p.385).

One more thing: Telford Work writes in his essay that he was spurred on some years ago to think about how his Pentecostal church could 'enrich our practice and appreciation of communion', because of an evangelical friend who was being drawn towards Eastern Orthodoxy by the eucharistic liturgy. 'I didn't want people like him to feel like they had to leave us in order to join "the New Testament Church" that took communion more seriously' (pp.131-132). I'm not entirely sure about America, but in Britain at least, it's the Pentecostals who have always claimed to be restoring New Testament church life. So the idea that people would feel the need to move away from Pentecostalism to a more liturgical tradition to find the New Testament church would shock and startle most British Pentecostals. And yet, if we marginalise the Breaking of Bread, we'll end up having marginalised a fundamental pillar of New Testament church life (Acts 2:42). And if that's what we end up doing, then the weekly liturgy of Holy Communion at the gospel-preaching parish church down the road will have a far stronger claim than us to representing genuine New Testament church life.

Now, after all that, should you want to read something on Pentecostals and the Breaking of Bread from a British perspective, then here are a few things written by British Pentecostal theologians: