Speaking in Tongues: A Review of Robert Menzies’ New Book 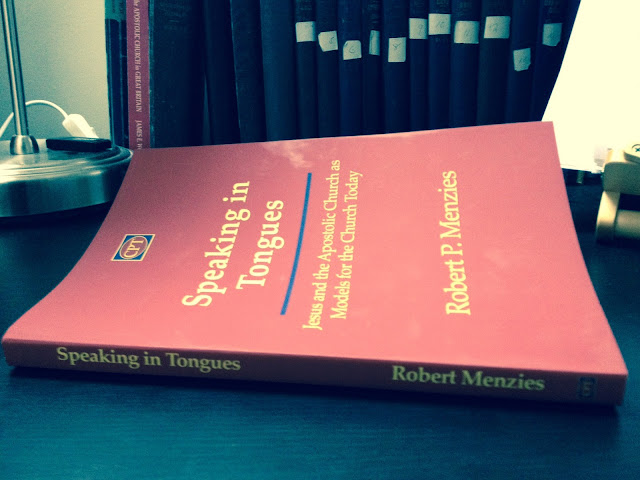 Robert P. Menzies is already an established name in Pentecostal scholarship. His work on the baptism of the Holy Spirit has had a significant impact and provided a substantive Pentecostal defence of the doctrine of subsequence. Now, in Speaking in Tongues: Jesus and the Apostolic Church as Models for the Church Today (Cleveland, Tennessee: CPT Press, 2016), he’s turned his attention to the related issue of speaking in tongues. In his new book, Menzies takes a wide-ranging look at what the Gospels, Acts, and Paul have to say on the matter. Some of the texts he examines might not be the first ones that pop into your head when you think of Bible passages about tongues, but Menzies does an incredible job of showing not only their relevance, but how deeply embedded the issues involved in any doctrine of tongues are in the New Testament. For those who imagine that tongues are a concept limited to Acts and 1 Corinthians, one of Menzies main section headings might come as a bit of a surprise: part two of the book is entitled ‘Jesus and Tongues’.

Menzies looks at both the connection between tongues and the baptism of the Spirit, as well as looking at the gift of tongues in its own right. Finally, having examined the Biblical materials (as the New Testament scholar that he is), Menzies doesn’t leave us in the ancient Mediterranean world, but concludes with some 21st century theological reflection on the value of tongues .

What makes this book even better is its accessibility. Menzies is well-respected New Testament scholar, but this book isn’t couched in the technical jargon that so much NT scholarship is hidden behind. He gives us good scholarship here in a straight-forward, readable way. So hopefully this book should be easily accessible to Pentecostal pastors who might be put off by overly technical works. If you can cope with reading a decent commentary (like maybe the Pillar New Testament Commentaries or the New International Commentary on the New Testament series), you’ll have no problem whatsoever reading this book.

One last thing: Menzies concludes each chapter with a testimony. And really, I think this adds to the strength of the book. The testimonies he gives are well-connected to the issues he’s been discussing in the chapter, and (for the most part) very well highlight how the New Testament scholarship connects with the life and mission of the church. And the order is significant too: first serious biblical study, then experience. The Pentecostal faith is grounded in Scripture, and our experience interpreted in light of what the Bible teaches.

This is far and away the best book I know on the subject of speaking in tongues. I think those who read it will look at tongues in a fresh light, and I hope it will be widely read and have a significant impact.
Labels: Baptism of the Holy Spirit books Gifts of the Spirit Pentecostal recommendations