Some Fascinating Research from which the Apostolic Church can learn 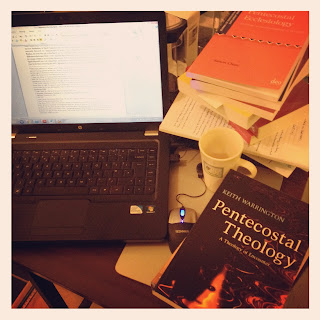 Yesterday I posted a quotation from Luke Worsfold’s PhD dissertation on the Apostolic Church in New Zealand. It’s a fascinating piece of research, partly because, as far as I’m aware, it’s the only piece of scholarly research on the Apostolic Church in any country, apart from what's been done by Bryn Thomas or me. (But if any of you do know of any other academic work on the Apostolic Church, let me know about it!) If anyone happens to have read Worsfold’s dissertation and has also read anything I’ve written on ecclesiology or prophecy, you’ll be able to guess that I’d disagree very strongly with his conclusions, but disagreement over what conclusions to draw doesn’t undermine the value of the research. His work needs to be read by ministers within the Apostolic Church, for there are lots of things we should learn from the data he presents (although, of course, the things I think we need to learn from it are not necessarily the things he thinks we need to learn!).

Now, I’m used to reading academic things, but I realise for a lot of people in the Apostolic Church this dissertation might be a bit uncomfortable – it’s not a difficult academic read, but it’s simply that it attempts to take an objective academic look at the church. In other words, although Luke was an Apostolic pastor in Australia when he wrote it and although his father had been the president of the New Zealand Apostolic Church, this is not a sympathetic look at the Apostolic Church. When it deals with history, it’s critical academic history, not hagiography. That might not surprise us so much with long distant history, but this account comes right up to the 21st century and involves living people. As Luke himself notes, in a small denomination like the New Zealand Apostolic Church, people are more likely to only speak openly about the good things, or to put a good spin on everything, so a frank critical (in the academic sense) treatment might come as rather a shock.

At times, I think Worsfold is too critical, particularly in some things to do with prophecy and also in his assessment of D.P. Williams and the origins of the UK church. When it comes to 1916, I completely disagree with his interpretation of events, and think it's a bit overly reliant on anti-Apostolic sources. And I’m saying this not based on the hagiographical accounts of the movement’s origins (of which Worsfold is so critical), but based on my research on D.P. Williams over the past decade. If Worsfold’s reconstruction were correct it would involve a huge discrepancy between Williams’ actions and his theology. And while, yes, it is quite possible for people to act out of line with their theology, such a discrepancy between Pastor Dan’s ecclesiology and what he did would be completely out of character for him. So much of what he did was determined by his ecclesiology that it is very hard to swallow a reconstruction of 1916 which would fly in its face.

When it comes to the prophets and prophecy, I suppose the reasons I’d think Worsfold is too critical stem from the fact that he takes rather a different view of the nature of prophecy than I would. He deals with the shift in New Zealand Apostolic attitudes to prophecy, moving from a D.P. Williams-like understanding to a more Grudemesque position. I still stand at the D.P. Williams end of the spectrum, Worsfold doesn’t. As a result he’s much more critical of the contents of transcripts of prophecies than I would be. For example, at one point he dismisses a prophecy about growth in the New Zealand Apostolic church on the grounds that God wouldn’t be interested in denominational statistics. While agreeing that the Lord likely has a rather different view of denominational statistics than the ones we can so easily be tempted to fall into, I don’t see in any way how that would mean you couldn’t have a genuine prophecy about growth, for the Lord does care both about the assemblies, and about His servants who sometimes need encouragement.

Anyway, my goal here is not to refute Worsfold, but to encourage people to read his dissertation. There are lots of historical lessons here for us to learn from. New Zealand often seems to be held up as a shining example of growth and progress. Worsfold shows that that isn’t necessarily the case at all. So for those who would be tempted by the grass always being greener on the Antipodean side, a warts and all account is a profitable counter-balance. But much more importantly than that, Worsfold’s research presents us with so much we can learn from – sometimes in the form of problems and mistakes which have been made elsewhere, sometimes in the form of good things from other places. He also highlights how quickly and easily a denomination’s theology can shift when prospective ministers aren’t taught its own doctrine. (Worsfold particularly highlights this with regard to the doctrine of the baptism in the Holy Spirit.)

I’m certainly not saying Yea and Amen to everything in Luke’s dissertation, but just because I disagree with his conclusions doesn’t mean I want to ignore his work. Research like this should be of benefit to the church. But it can’t be of benefit unless it’s read by ministers of the church. So I want to encourage people to read it. Read it critically (in the good sense of the word, just as Luke has read the history and theology of the New Zealand church critically). Read it and learn.

I might interact a bit with some things from Luke’s dissertation on the blog in the future, because it really is a fascinating piece of research with a lot for us to learn from.
Labels: academic Apostolic Church Baptism of the Holy Spirit history Pentecostal prophetic theology