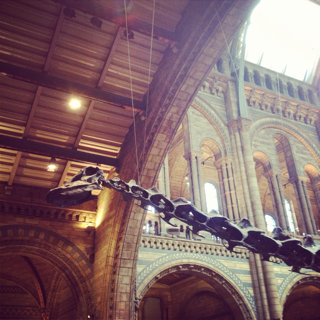 One of the most curious events in all of Scripture is found in a single verse in 2 Kings 13. That chapter records the death of the prophet Elisha, and yet, there’s still one more story of Elisha here some time after his death. 2 Kings 13:21 tells us:


So it was, as they were burying a man, that suddenly they spied a band of raiders; and they put the man in the tomb of Elisha; and when the man was let down and touched the bones of Elisha, he revived and stood on his feet.

Elisha was dead. And yet when a corpse was thrown into his tomb hastily in an attempt to hide from marauding bands of Moabites, the man came back to life simply by his corpse touching Elisha’s bones. Even as miracles go, that one’s quite impressive.
Yet it’s not one we tend to talk about all that often. Elisha and the widow’s oil, Elisha raising the Shunammite’s son, Elisha sending Naaman the leper to dip in the Jordan: these we know and love. We might even be quite familiar with the floating axe-head, the feeding of the one hundred, or the healing of the water. But yet there seems to be a silence cast over Elisha’s bones and the raising of the dead man.

Now, I imagine that silence is due to a certain discomfort. You see, the only time I ever hear this miracle mentioned is by Anglo-Catholic friends arguing for the veneration of relics and prayers to the saints. The bones of Elisha almost seem to be the perfect proof-text for the power of relics. And so, no wonder we evangelicals are somewhat more reticent to talk about Elisha’s bones.

Yet we shouldn’t, for there is much we can learn from Elisha’s bones. The Holy Spirit did not inspire this verse to have us hastily rush past it in the most hushed of tones. Rather, like all Scripture, it is ‘profitable for doctrine, for reproof, for correction, for instruction in righteousness’ (2 Tim. 3:16).

But before I go on to what we can learn here from 2 Kings 13:21, let me just dispel our dis-ease. For, you see, although it might still be trotted out as a proof-text for relics today, that argument was debunked back at the Reformation. As Martin Chemnitz put it in his refutation of the Roman Catholic doctrine defined at the Council of Trent:


Scripture does not say that that dead man was brought to the tomb of Elisha with the aim and purpose that he might be brought back to life by contact with his bones, as though it had been at that time the custom among the people of God to run to the sepulchres of the prophets or saints in order to seek grace and power among the bones of the dead by means of vows and invocations. But the text says that that man was by an unexpected emergency cast into the sepulchre of Elisha when they wanted to bury him and, because the brigands came upon them, did not have time to make a grave. Therefore, lest the unburied corpse should be exposed to the caprice of the enemies, the opened the cover of the sepulchre that was nearest, which was that of Elisha, and did not lay the dead person in it (for they did not have time for that), but threw in the corpse. When it had fallen to the bottom, it touched the bones of Elisha and came back to life …

Now , also after that miracle took place, we do not read that the bones of Elisha were taken out of the tomb, elevated to a high place, carried about; they were not set forth to be kissed, touched, viewed; they were not honoured with candles, not adorned with silk, not adored with invocation for the purpose of obtaining help, not set forth for a special cult. Neither was a pilgrimage instituted to these bones for the purpose of there seeking the grace and power of God; indulgences were not promised; these relics were not laid on the sick and on the dead; people did not swear by them; faith and hope were not placed in them, etc. We read absolutely no such thing in Scripture about the relics of Elisha, also after that outstanding and amazing miracle through his bones had taken place. But the bones of the prophets were left in their tombs or sepulchres, as also Christ declares (Matt. 23:29).

So, let’s reclaim this verse. To borrow a biblical expression, Elisha being dead yet speaks. Elisha’s bones declare the Word of the Lord to us, so let’s listen to what they have to say. Here are two important things I think we can learn here, and then after my suggestions I’ll give you what Chemnitz suggested as well.

1) In death, our bodies are still united to Christ.

Salvation isn’t just for our souls; we’re saved as whole persons. So at death, Christ doesn’t abandon our bodies. It’s not a case of our souls flying off to heaven to be with Jesus, while our bodies are quietly forgotten and no longer of any significance. Far from it! That’s why when Christianity came to this country our funeral practices changed: we stopped cremating and started burying because Christians die in the sure and certain hope of the resurrection of the body. Our bodies still belong to Christ after death. Our bodies are still united to Christ after death. And so our bodies will one day be glorious raised by Jesus from death.

The Westminster Shorter Catechism succinctly puts it like this:


Q. 37. What benefits do believers receive from Christ at death?
A. The souls of believers are at their death made perfect in holiness, and do immediately pass into glory; and their bodies, being still united to Christ, do rest in their graves till the resurrection.

2) All the power to work miracles is found in Christ alone, not in what man has done

Despite the apparent claims of the TV “preachers”, the power and ability to perform miracles is found in God, and not in man. And God’s miraculous power isn’t down to the great merit or virtue of the “man of God” either. Just in case anyone wasn’t sure about that, 2 Kings 13:21 makes it very clear.

Elisha was dead. So he hadn’t done lots of good things that week. This miracle wasn’t down to how good he’d been of late. It wasn’t to do with any virtue in him or any merit he had somehow accrued before God. He was dead. He couldn’t do anything. Only God could. Only Jesus.

To us, there is nothing weaker than dead bones, yet ‘God has chosen the weak things of the world to put to shame the things which are mighty … that no flesh should glory in his presence’ (1 Cor. 1:27,29 – and yes, I know Paul’s not talking about dead bones there, but the dead bones illustrate the principle). That’s the grace of God in Jesus. It’s not down to our great strength and power. No. We’re weak. We’re powerless. But yet by faith we are united to the one who is the Wisdom and Glory of God.

3) Chemnitz’s answer: The LORD confirms the Truth of His Word

Martin Chemnitz points out that this comes after the account of the dying prophecy of Elisha (2 Kings 13:14-19). As he lay dying, Elisha prophesied victory for Israel over the invading Syrian armies. Then, after his death, as Israel was facing invasions, God confirmed the truth of Elisha’s dying prophecy through this miracle. Chemnitz points out how this was the Jewish understanding as seen in the apocryphal book of Ecclesiasticus (‘When he was dead, Elisha’s body prophesied – Ecclus. 48:13). And so he concludes that the dead man came back to life by touching Elisha’s bones:


In order that God might by this miracle remind the Israelites of the prophet Elisha, that they should not fear hostile incursions if only they would cling to the Lord. (Chemnitz, pp.26-27)

So, there you have it, Elisha’s bones prophesied to the Israelites that day, and they still speak to us today pointing us to how God works miracles only by His grace in Jesus (we don’t work them by our power, nor does God work them on the basis of our works or merits) and to how our bodies remain united to Christ after death, awaiting the day of His return to raise the dead. These are the bones of Elisha, declaring the Word of the Lord.
Labels: death Gifts of the Spirit Jesus Old Testament resurrection union with Christ