We eat His flesh; We drink His blood: An Apostolic View of the Breaking of Bread 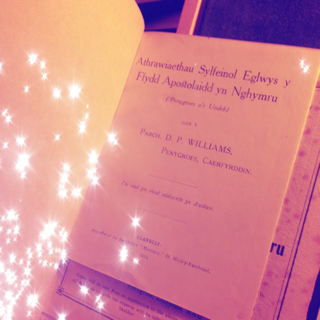 I wrote a journal article a few years ago on the theology of the Breaking of Bread among the early Apostolics in the UK. (You can find basically the same material in pp.6-13 of this paper.) The basic jist was that D.P. Williams and other early Apostolics didn't believe that the Lord's Supper was just a memorial. (They weren't Zwinglians!)

So the other day I was getting quite excited to find some new material that I hadn't seen before from D.P. Williams on the Lord's Supper, where he writes that at the Table, 'we eat His flesh; we drink His blood.' (And before anyone gets carried away and thinks that I or D.P. Williams have gone Roman Catholic and started to advocate transubstantiation, have a look here.)

Anyway, for some reason this non-Zwinglianism doesn't seem to be all that well known a fact. And today I think I might have discovered why that is.

You see, a lot of D.P. Williams' early writing was in Welsh. (In fact, the vast majority of writing from the first few years of the Apostolic Church was in Welsh.) So, seeing as (apart from most of the material being incredibly hard to find in the first place), for most people in the church today there's an immediate language barrier.

However, there is one thing that D.P. Williams wrote about the Lord's Supper which is both translated into English and much more accessible. You see, some years ago, James Worsfold (a former president of the New Zealand Council of the Apostolic Church) wrote a history of the early years of the Apostolic Church in the UK and her early missionary work. (The Orgins of the Apostolic Church in Great Britain with a Breviate of Its Early Missionary Endeavours - It's a red book that is often to be found in pastors' studies.) Now, in his book Worsfold included a translation of the full text of one of D.P.Williams earliest works from 1914, Athrawiaethau Sylfeinol Eglwys y Ffydd Apostolaidd yn Nghymru [sic. - Welsh spelling wasn't standarised until about a decade later] (Foundational Doctrines of the Apostolic Faith Church in Wales). It was a small catechetical work, designed both to teach the faith and defend the Penygroes church against accusations (from non-Pentecostals) that they had departed from the historic Christian faith.

Worsfold's translation (he wasn't actually the translator, as he didn't speak Welsh, but I'll refer to it as his as it appears in his book), has always been quite handy to refer to. And so, now to my shame, until today I had never bothered to read the Welsh original. For when I did, I got a bit of a surprise.

You see, someone has tampered with Worsfold's translation and changed D.P. Williams' theology! I don't know if it was the translator, or Worsfold, or an editor (the book was published in New Zealand, so I have no idea who was involved at the various stages), or I suppose someone could even have altered the text before giving it to the translator (although that does seem a bit elaborate). But someone has made a very significant change to try and turn D.P. Williams into a Zwinglian.

To be fair, I had almost forgotten that the Athrawiaethau Sylafeinol dealt with the sacraments, and have never used it to refer to D.P. Williams' eucharistic theology (which he sets out in much more detail elsewhere). It's also a work from before the Apostolic Church technically came into being, so I often forget all about its existence. But it was the very first bit of D.P. Williams' writing that I ever read.

So when I read it in Welsh this evening and got quite excited about its eucharistic theology, I wondered why I hadn't noticed it when I first read the Athrawiaethau Sylfeinol back when I was a teenager. So I opened up Worsfold's book to have a look, and got a shock.

Here's my translation of what D.P. Williams says:


We partake substantially, through faith, of His body and His blood, to be sustenance for the spiritual life. 'Unless you eat the flesh of the Son of Man and drink His blood, you have no life in you.'

(That last part, of course is taken directly from John 6:53.)

But here's the translation in Worsfold's book:


We are partaking symbolically, through faith, of his body and blood, to sustain our spiritual life. 'Unless you carry out this symbolic act there is no life left in you.' (p.98)

Notice the difference? While in a sort of dynamic equivalence translation you might get away with using the verb 'sustain' instead of the literal rendering with the noun 'sustenance', when we're dealing with the nature of the Lord's Supper, that translation choice does make a difference. Do symbols and faith sustain us, or does Christ's body and blood feed us as our sustenance?

But changing substantially to symbolically isn't a translation option at all. That's a theological change. And while at first I thought it might just be a mistake, when you read on and see how John 6:53 has been replaced with a 'symbolic act', then this must clearly be a deliberate change. I've no idea who changed it, but somebody did.

Clearly, someone somewhere was a bit uncomfortable with D.P. Williams' view of the Lord's Supper and so Zwinglified it! But D.P. Williams wasn't a Zwinglian. He didn't believe that the Lord's Supper was a mere 'symbolic act'. He believed that, by faith, we substantially feed upon the body and blood of Christ in the Supper. Or, as he put it more starkly elsewhere, 'as we commune with Him ... we drink His blood; we eat His flesh.' (Oh, and that one he wrote in English, so there are no translation issues at all.)

I hope we see much more of a recovery of our original eucharistic theology, so I'm pointing out this translation error just to help clear away some of the misconceptions about what we have classically believed on the Lord's Supper.
Labels: Apostolic Church D.P. Williams doctrine ecclesiology history Pentecostal sacraments theology