Jesus Walked on Water So You Don’t Have To! 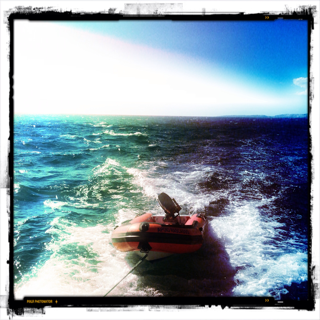 But, you ask, what about Peter? He stepped out of the boat. Surely we should be like him?! Well, maybe not. Three of the Gospels tell us of Jesus walking on the water, yet only Matthew mentions what Peter did, which suggests that Peter’s role wasn’t the most important part of what was going on. For, you see, this miracle is all about Jesus and points us to Him, not Peter. It’s Jesus who is at the centre.

And what does Matthew really tell us about Peter anyway? Does he tell us that this was a fantastic thing that Peter did and that all the other disciples should really have done the same thing? Does he urge us to follow Peter’s example? No, not at all!

Matthew tells the tale in Matt. 14:28-33. But how do we read those verses? Normally, I think, we tend to go to verse 31 and read it as a cautionary tale of Peter’s faith (or lack thereof), for in v.31 Jesus says ‘O you of little faith, why did you doubt?’ BUT is Jesus really saying ‘if you’d only been better at believing you could have done it!’ Not at all!

The doubting, the lack of faith, isn’t about Peter’s inability to walk on water – it’s about his question back in v.28. There he had asked, ‘Lord, IF IT IS YOU, command me to come to you on the water.’ You see, Peter’s looking for a miraculous sign to prove it’s Jesus. But instead, Jesus reveals Himself as the God who saves!

Jesus lets Peter come out to Him on the water, knowing that Peter can’t walk on water. In fact, not only does Jesus know that Peter can’t walk on water, but Peter should know it too. Yet his very attempt shows that he’s completely missing the point of what’s going on. Jesus isn’t walking on water because He’s a man with some great miraculous ability. Jesus is walking on water because He’s the God-Man. Job 9:8 speaks of God: ‘He alone spreads out the heavens and treads on the waves of the sea.’ God alone walks on water. So this miracle is a sign pointing to the reality of who Jesus is. He is God in the flesh. After all, treading on the waves requires feet, so it’s only the Incarnate God who has feet to walk on the waves of the sea. Jesus walks on the water to His disciples, revealing to them that He is indeed the Incarnate God. But Peter misses the point. He sees the spectacular miracle, but instead of falling down in worship at the feet of God in the flesh, he wants to make it all about him.

Peter can’t walk on water. Only the God-Man can. So Peter, through His lack of faith in who Jesus is revealing Himself to be, ends up in a situation where he’s helpless, where he’s in pain of death, where he needs to be saved. And Jesus saves Him.

When Peter seems the strongest, what he really demonstrates by his seeking of the sign of walking on water is doubt. He isn’t trusting that Jesus is who He’s revealed Himself to be. Yet, when Peter’s at his weakest, about to drown, then he looks to the Saviour, and that’s true faith. A constant seeking after signs might look strong, but it’s powerless. Salvation comes when we look to the Saviour in out utter weakness.

So, Peter’s walking on the water isn’t about being challenging. So often we can be like Peter, looking for the challenge: command me to come to You on the water (v.28). But that’s a theology of glory. That’s us trying to climb our way up to Jesus by our own efforts. That’s us relying on what we can do.

Instead Jesus offers us a different way: And immediately Jesus stretched out His hand and caught him (v.31). Jesus offers us His gospel of grace. Jesus takes the initiative. Jesus saves from first to last.

The Christian faith isn’t about challenges. The only challenge is to stop looking for a challenge, and instead rest in Jesus and what He’s done for you!
Labels: gospel grace Jesus law and gospel New Testament salvation