"But it's just one line!": The Words We Sing Really Do Matter 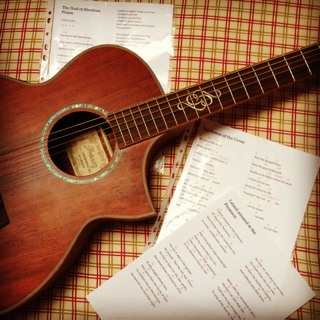 
Holy God,
Holy Mighty,
Holy Immortal,
Have mercy on us.

Now, once upon a time — and by "once upon a time" I mean in the year 511 —  in a land far, far away — by which of course I mean the city of Antioch in Syria — a man named Peter decided to add a line to the chorus. (Peter could get away with that sort of thing as he was the Patriarch of Antioch, which was roughly the fourth most important office in the entire church throughout the world in ancient times.) Peter's new version of the chorus went like this:


Holy God,
Holy Mighty,
Holy Immortal,
Who was crucified for us,
Have mercy on us.

The new line went down quite well in Antioch and Peter and his flock sang it happily. And the song began to spread. They didn't have iTunes in those days, so it took Peter's new version of the chorus a bit of time to spread. But the next year it reached Constantinople, the captial of the Empire. And when it did, the reaction was a wee bit different from that in Antioch.

In AD 512 Peter's new version of the Trisagion (that's the name of the song) was sung in the streets of Constantinople, and the new line did not go unnoticed. So unnoticed did it not go that it sparked a riot. Statues of the Emperor were torn down (he was the one who had allowed the procession through the streets where the song was sung) and the houses of many prominent people who were thought to support the sort of teaching reflected in the new line of the song were burnt to the ground. After that chorus was sung on that day in 512 no one could say "But it's just one line"!

(By the way, without getting into the ins and outs of early 6th Century Byzantine theology and ecclesiastical politics, I should at least say something at this point about how on earth the words 'who was crucified for us' could possibly be so objectionable. In short the answer is this: in Antioch they considered the Trisagion to be a song addressed to Jesus, but in Constantinople they thought it was a song addressed to the Trinity. So, to the ears of the people in Antioch it would have been very good gospel theology, but to the ears of the people in Constantinople it would have been shocking heresy!)

Okay, so we don't have that many riots sparked by lines in worship songs today. But that doesn't mean that the odd erroneous line here or there doesn't matter. Why? Because songs teach. In fact they probably do a lot more teaching than the actual "teaching" does in church. Just think about it. We sing the same songs again and again (but we only hear a sermon or Bible study once), and not only that, but singing is actually something that helps you learn and remember. Occasionally a teenager at church will say something about their amazement when they realise that I can sing a full 6 or 8 verse hymn without any words in front of me. I just tell them that by the time they're my age they'll be able to do it too. That's just what happens when you sing something repeatedly for a good number of years!

Whether we consciously realise it or not, we are being taught and formed by the songs, hymns and choruses that we sing week in week out in church. As Bob Kauflin puts it:


Songs are de facto theology. They teach us who God is, what he's like, and how to relate to him. "We are what we sing," one man said. That's why we want to sing God's Word. (Worship Matters, p.92)

And this isn't some new development that's come along to take us by surprise. The great hymnwriters of the past knew that people learnt most of their theology from what they sang, and that's why they wrote their hymns. Charles Wesley wrote an average of 3 hymns a week — over 6,500 hymns in his lifetime — because he knew they were a very effective way of teaching people God's Word.

Long before Wesley, during the Reformation Martin Luther had written hymns with the goal of proclaiming the gospel and putting it on the lips of God's people. In his own words, Luther wrote hymns 'so that the holy gospel which now by the grace of God has risen anew may be noised and spread abroad' (Luther's Works 53:316). Through singing gospel filled hymns, people would be filled with the knowledge of the gospel truth of who Jesus is and what He has done for us and for our salvation.

Even before the Reformation, all the way back in the 4th Century, the fathers of Western hymnody, Ambrose of Milan and Hilary of Poitiers, wrote their hymns with the express purpose of teaching the true faith. At the time Arianism (a heresy which denied that Christ was God) was rife, and, interestingly for the matter at hand, Arius had succeeded in spreading his heresy by writing catchy choruses to teach people his false gospel. The rise of the heresy owed a great deal to a line here and there in the worship songs Christians were singing! But just as Arius used songs to spread false teaching, Ambrose and Hilary used songs to teach the true faith. Both the true pastors and the false teachers knew that what we sing is one of the most effective means of teaching the faith.

So, throughout the history of the church, it's been well recognised that what we sing is of great importance, whether for the better or the worse. And it's still true today. We need to think carefully about the words of the songs we introduce and use in church (and even the songs we listen to at home). Are they songs that build us up in the truth of the gospel? Or are there dangerous lines that point us away from the gospel? It might seem insignificant as it's only one line, but lines which point us away from the gospel are even more dangerous than lines which spark ancient Byzantine riots!

(I might give a few examples next week, but I'm not going to add them just now, lest they overshadow what's already written.)