There Are No Barnacles On God: The Incarnation, The Person of the Son, and Diagrams

There’s a well-known and widely read book of theology among us evangelicals that tries to present the Incarnation of Christ in the form of a diagram to help us understand. Yet, I’m rather uneasy with the diagram it presents. (Well, actually more than rather uneasy – but I’m British and that’s how we express these things.) It’s attempting to show that ‘Christ’s divine and human natures remain distinct and retain their own properties, yet they are eternally and inseparably united together in one person.’ (That’s from p.557 of the book in question, where the diagram can also be found – by the way, the same diagram lives on p.244 of the shorter version of the book.) That’s all very well, but the diagram actually does something else over and above that. It seems to create a new Person. Have a look at the diagram: 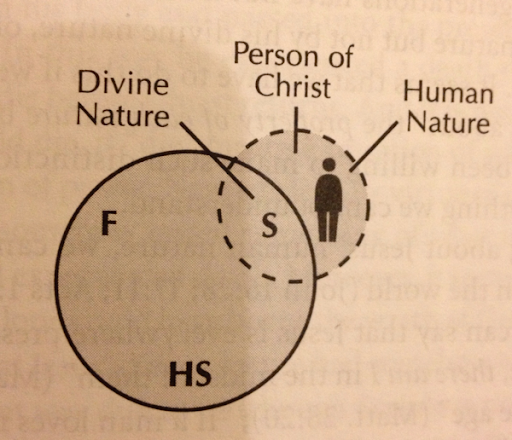 Do you see what I mean? In an attempt to highlight the hypostatic union of the human and divine natures in Christ, the diagram does the following:

What’s wrong with that? Well, it’s true, Jesus is true man and true God; His One Person consists of two natures – one human and one divine. But that’s not the problem with the equation (and the diagram from the book). No the problem is where it locates God the Son.

This is what the ancient creeds (which define Christology) tell us. The Nicene Creed says that we believe ‘in one Lord Jesus Christ, the only-begotten Son of God, begotten of the Father before all worlds ... who for us men and for our salvation, came down from heaven, and was incarnate by the Holy Spirit of the Virgin Mary, and was made man’. So according to the Nicene faith – that’s the faith of the universal church – the one Lord Jesus is the only-begotten Son who was made man for us and our salvation.


‘the same Son, our Lord Jesus Christ, the same perfect in Godhead and also perfect in manhood: truly God and truly man, of a reasonable soul and body; consubstantial with the Father according to the Godhead, and consubstantial with us according to the Manhood ... one and the same Christ, Son, Lord, Only-begotten ... one and the same Son, and only-begotten, God the Word, the Lord Jesus Christ...’

You see that – the Person of the Son is consubstantial with us according to His true Manhood. And that One Person is the Only-begotten Son, God the Word.

Perhaps most clearly and succinctly (which is an odd thing to say of the Athanasian Creed), the Athanasian Creed tells us that, ‘our Lord Jesus Christ, the Son of God, is God and Man’, and that this is so ‘by taking of the Manhood into God.’ The One Person of Jesus Christ is not the adding together of divine nature and human nature, but the taking of human nature into God in the One Person of the Son.

Anyway, I was reminded of my uneasiness with said diagram as I was reading Thomas Torrance’s The Christian Doctrine of God: One Being, Three Persons. So let me just leave you with some words from Torrance:

So, let’s get rid of those limpets and barnacles from our diagrams of the Trinity!
Labels: Christology doctrine incarnation Jesus theology Trinity