Review of Trinity After Pentecost (and some thoughts on Pentecostal theology) 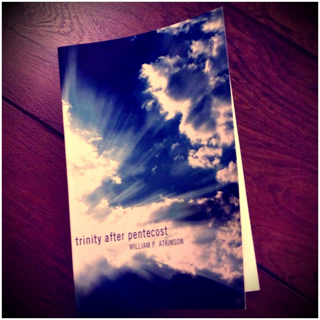 Derek Tidball writes that this book ‘is further evidence, if proof was needed, that pentecostal theology has come of age.’ And that’s not just hype for the back of the book, for William Atkinson ventures boldly and confidently out of the safe waters of ‘Pentecostal and Charismatic Studies’ into the wider currents of systematic theology (and sails them with ease).

But Pentecostal systematic theologians are increasingly breaking out of those self-imposed limits in two significant ways: 1) writing on non-uniquely pentecostal topics, and 2) writing for, and in discussion with, a broader audience than merely the pentecostal academy. And that is very good news for pentecostal theology.

And that’s what Atkinson is doing here. He writes as a Pentecostal from a Pentecostal perspective, yet examining, not a pentecostal distinctive, but the central doctrine of the Christian faith. And he does so admirably, with the result being a stimulating theological monograph that is a pleasure to read and which provides plenty upon which to reflect and with which to wrestle (in the best possible sense).

Atkinson starts with Pentecost (and particularly Acts 2:33) and so approaches the doctrine of the Trinity not from the Father or His revelation in the Son, but through the church’s experience of God through the Spirit. So, after laying out some important introductory matters such as aims, challenges to rigorous Pentecostal trinitarianism, presuppositions, and defining his approach to personhood, Atkinson sets off to look in turn at the Spirit, the Son and the Father through the lens of Pentecost, and then concludes by drawing out the themes of kenosis and exaltation, reciprocation, and perichoresis, before finishing with a triad of Trinitarian models to be held in perichoretical, paradoxical tension.

The theme of Kenosis and Exaltation runs throughout the book, and, I have to admit, at first I was a bit sceptical, but Atkinson won me over. My scepticism was, no doubt, in part due to the choice of language – after all, although a fully biblical word, kenosis has a reputation for being associated with unorthodox Christological ideas. Yet Atkinson is clear that the late 19th/early 20th century ideas of Christological kenosis are not at all what he has in mind. His explanations are very clear and well argued, and as a result his theme of kenosis and exaltation gives shape to what the intra-trinitarian relations of love look like in their outworking.

Atkinson also strongly upholds the monarchy of the Father (which is refreshingly orthodox, as the last time I went to a Pentecostal theological conference it seemed like there was fury unleashed in the room when Simon Chan dared to mention the monarchy of the Father), seeing this, along with perichoresis, as essential to guard the social model of the Trinity (or as Atkinson prefers to call it, the ‘relational model’ –p.158) from drifting in a tritheistic direction. He also argues for a suitably robust version of perichoresis that is not only relational, but pervasive.

I’m quite enthusiastic about his presentation of the monarchy of the Father and his strong doctrine of perichoresis. You see, the reason I was keen to get hold of this book was that I’m writing a PhD, one of the chapters of which is on Pentecostal Trinitarian thought. And it turns out the this contemporary Pentecostal Trinitarian theology of Atkinson has many resonances with the historical British Apostolics I’m looking at for the rest of the PhD, particularly when it comes to a relational model of the Trinity balanced with a strong view of the monarchy of the Father and a unity consisting in a perichoresis which is both relational and pervasive. The two arrive there in different ways, but it’s interesting to see the similar conclusions for a Pentecostal Trinitarian theology.

Anyway, moving on to a few more things I appreciated about Atkinson’s work. Very importantly (in my view), Atkinson is clear and enjoyable to read. From Amos Yong’s blurb on the back cover you’d be forgiven for expecting this to be one of those impenetrable theological tomes that take forever to work tediously through – but that’s not the case at all. Atkinson’s prose is sharp and clear; you don’t need to wrestle with his writing before being able to wrestle with the concepts he’s writing about. If only more theologians would write so clearly!

I suppose at this point I should note a few criticisms (that is, after all, standard fare for a book review). In reality, I don’t have much criticism to offer. That’s not to say that I’m 100% sold on every word coming from Atkinson’s pen; as I’ve said already there’s much to reflect on and chew over here.

One point that I found difficult (and which I need to think about more) was Atkinson’s view of the impersonal aspect of each of the three persons of the Trinity. My discomfort here may simply boil down to a matter of language – and Atkinson himself admits that this may not be the clearest language, stressing that by impersonal he means more than personal, rather than less. Yet I find it hard to read impersonal as other than less than personal. I suppose Atkinson’s approach to personhood would also be helpful in thinking through this issue.

My other two criticism focus on things that are much more incidental to the book. Firstly, I question Atkinson’s assertion that ‘the God of the Old Testament is the one the New Testament identifies as Father’ (p.116). Earlier, he himself acknowledges that this isn’t so straightforward when discussing the Son’s role in revealing the Father, asking, ‘Which person of the Trinity was revealing God to Moses? Who or what was the Angel of the LORD?’ (p.100), but then (unjustifiably, in my view) goes on to say that ‘from a Trinitarian point of view these questions are probably best avoided’ (p.100). (On that note, see Paul Blackham, ‘The Trinity in the Hebrew Scriptures’, in Paul Louis Metzger, ed., Trinitarian Soundings in Systematic Theology.) Secondly, in his desire to avoid proof-texting, I worry that, at times, Atkinson goes too far, and ends up possibly subsuming a valid exegetical conclusion from a particular text into the category of proof-texting. This in turn leads to the problem that, on rare occasions, ‘theological’ arguments seem to be accepted where biblical arguments are cast out. (I can only remember one definite incidence where this happens – the page number of which I unfortunately forgot to note – but there is a second example where Atkinson, although rejecting the ‘proof text’ due to a difference in exegesis, nevertheless gives the impression that, had it been accepted, it would still not be a sufficient argument in itself – p.156). This raises some questions in my mind about the place of Scripture in theological formation, and yet, at the same time, I recognise that Atkinson is writing for a diverse audience with divergent views on the matter, and not simply for British Pentecostals.

Finally, I want to ask if Atkinson achieves his aims. Right on page one Atkinson tells us that ‘this book aims to offer an account of the Trinity from a Pentecostal viewpoint’, and in that he not only succeeds, but excels. But he also has a secondary aim: ‘to bridge the divide that exists between academic theological study and current Pentecostal church practice and mission … With this in mind I try to write in a way that is reasonably accessible for people who may not be used to scholarly language’ (p.2). Here I’m not quite so sure that he’s been successful. As I’ve already said, his writing is clear and readable. Yet, I say that as a Cambridge educated theologian working on a PhD. In my experience in teaching and training Pentecostal church leaders, many people struggle with such comparatively easy texts as Wayne Grudem’s Bible Doctrine, never mind books that talk about Modalism, kenosis and perichoresis, replete with references to Moltmann, von Balthasar and Volf.

Now this isn’t Atkinson’s fault. It’s simply that most Pentecostal church leaders have limited theological training, if any at all. Perhaps in Atkinson’s context things are a bit better – he’s an Elim pastor and former principal of their theological college, so he’d know the situation and level of theological discourse in Elim well. And Elim do have higher expectations with regard to the theological training of pastors than either of the other two historic UK Pentecostal denominations. The Assemblies of God now requires some basic theological training, and the Apostolic Church none at all. William Kay’s Pentecostals in Britain is now 14 years old, but at the time it was written in 2000, 44.7% of AoG ministers and 69.1% of Apostolic ministers – as opposed to 13.7% of Elim ministers – had no formal training for the ministry whatsoever (Kay, p.216). In fact, only 9.9% of all Pentecostal ministers in the UK had a theological degree (Kay, p.217). From an Apostolic perspective, Kay’s research was carried out while we had both the Bible College and the MDP in place for ministerial training – today we have neither.

How could I not love a book whose first item on the bibliography comes from the Redemption Hymnal? It’s clear, it’s stimulating, and it’s a pleasure to read. It shows the significance of Trinitarian theology to Pentecostals and makes a Pentecostal contribution to the wider theological world (rather than the intra-pentecostal discussion of Pentecostal and Charismatic Studies), and it’s written by a British theologian who spent many years pastoring a local church. I look forward to reading more from Atkinson’s pen in the future and to continuing to ponder and reflect on Trinty After Pentecost.
Labels: academic Apostolic Church books Pentecostal theology Trinity