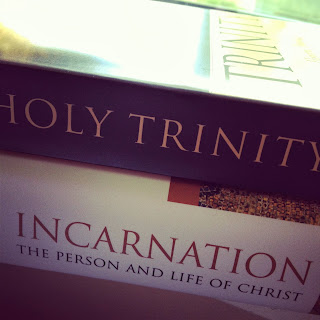 Down in Castleford we've been looking at some basic theology. I mentioned before that we'd started off by looking at Jesus, who is the revelation of God and who is God. So in the second session we went on to look at Jesus' Incarnation. We had a look at what it means for the Word to become flesh, and saw the real and full humanity of Christ. And we saw that this is the humanity of God the Son, so we now have a man in the Trinity.

Last night was session number three and we started to look at the Trinity. We looked at how Jesus in His life and ministry on earth revealed the Triune God (after all, Jesus is the Revelation of God!) and saw that the Trinity isn't a mathematical puzzle, but the very identity of our God. So far this has been my favourite session.

We'll look at bit more at the Trinity at the beginning of next week's session, looking more at the loving relationship Father, Son and Holy Spirit that we started to talk about last night. Hopefully after these sessions the Trinity won't see puzzle, but people will see the loveliness and great relevance of God's Triune being.

To be honest, I'm a bit disappointed with how the Incarnation session went. It was okay and I got positive feedback, but I just wasn't satisfied with it myself. I had prepared far too much material, so we didn't get to look at a lot of things that I'd have like to look at and which would probably have shed a good bit of light on the more difficult bits of what we did cover. Instead I think I just ended up turning glorious mystery into complicated mystery at times! It's probably the one time I've come home from teaching and wanted to immediately rewrite the lesson from scratch (which would have worked alright in the old days teaching at Bible College as I could teach it again the next year, but can't do in a church setting). So if anyone wants an hour-long session on the Incarnation, I'd gladly teach a new and improved version 2.0! I've put this one up anyway in the interests of completeness of the series (and combating my gnawing desires for perfectionism).

You can find the whole series so far (as well as a variety of other things) on the Audio page, which you can find at the top of the blog.

P.S. Here's the video from near the end of session 3. You can hear it on the recording, but might want to see it as well.