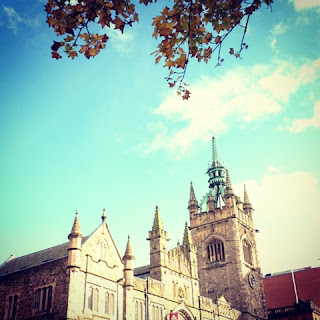 The story was that a family planning clinic had been set up on Gt Victoria Street. Now, elsewhere in the UK, as in many other countries in the world, such an occurrence would probably never make it into the news. But Northern Ireland is different, both culturally and legally.

Now, I'm from Northern Ireland, and so I'm rather saddened by the developments on Great Victoria Street. However, at the time I didn't write about it as I didn't think it was an appropriate response. It was well covered in the news and so people knew about it. So, why am I writing now?
I'm writing now, not because of the opening of the family planning clinic, but because, yesterday, I read an article responding to it. The article was from Charisma and written by its news editor. And I was appalled!

Two things particularly shocked me about the article: 1) a complete lack of cultural understanding and 2) the call for an inappropriate response.

Now, don't get me wrong, I'm not excusing abortion by talking about culture. Quite the contrary! My worry is that Americans can often inadvertently make the situation worse in other countries by speaking out in a way that lacks any understanding of the local culture.

I think Mark Driscoll did the same thing in the way he spoke on a British radio programme concerning the role of women in the church. While, like Driscoll, I'm a convinced complementarian, I think the way he spoke made things harder for the minority complementarian position in the UK. Speaking in a way which cuts across the culture can often be alienating and simply get people's backs up. The same position can be advanced in ways which are much more appropriate in British culture!

Likewise with abortion. It's clear from the Charisma article that the writer doesn't understand a great deal about the situation in Northern Ireland. As one comment (not me, even if he has the same name!) pointed out, the article doesn't even seem clear about which country/legal jurisdiction Belfast is part of. (By the way, the comment isn't clear on that either; UK abortion law doesn't apply in Northern Ireland which is its own legal jurisdiction).

And seeing as the writer isn't clear about the legal jurisdiction, it's not surprising that she doesn't understand the culture. I've lived in America, but perhaps what that has taught me is that I don't always understand American culture and they don't always understand ours. We may share a language, but cultural values, attitudes and appropriate rhetoric can be very different.

And when it comes to appropriate rhetoric, talking about 'mass murder' is certainly not appropriate in Northern Ireland! Plus, added to the Northern Ireland historical context, there's simply the fact that British public discourse tends to be less emotive than it may perhaps be in America. In the UK context, any discussion of an issue such as abortion requires more rational discussion. I suspect that it's the emotive discourse we often hear coming from abroad that has led to those who are opposed to abortion being frequently characterised as 'nutters' on UK panel shows. Shock-jock tactics are not going to make an impact on the legality of abortion in either Northern Ireland or mainland Great Britain, but they are going to raise the ire of those who support abortion. And in that case they may do much more of a disservice.

Already, even before the latest developments on Gt Victoria St, voices had begun to be raised in support of extending the Abortion Act 1967 to Northern Ireland, or otherwise liberalising our abortion laws. And these are homegrown campaigners, who understand and work within the appropriate cultural boundaries. Charging in with culturally insensitive pronouncements and calls to 'rise up and shut this thing down', could well simply alienate those people in Northern Ireland who are undecided on the issue.

How do we, as Christians, respond to something like an abortion clinic. It's an important question, as there are quite a few Christians in Northern Ireland (in the old edition I have of Operation World it claims that there are probably more evangelical churches within a 50km radius of Belfast than anywhere else in the world). And there are people, like the Charisma writer, who are urging them to respond in some way.

Response is right. But it must be a right response. According to Charisma, 'it's time ... to rise up and shut this thing down in the name of Jesus! It's time to let your voice be heard.' Now, I have to admit that I read those words from an American with a certain amount of cultural baggage. Coming from an American, what I imagine when I hear those words are pickets outside the clinic. Perhaps it's a cultural misreading, but others are bound to read it in the same way too. (More and more I'm finding that public discourse on the topic here on the UK mainland quickly veers off in the direction of American pro-life demonstrators.)

There was a peaceful protest on the day the clinic opened on Great Victoria Street. And, on the same day, the Attorney General called for a government inquiry, and today it's been announced that the Justice Committee have invited the Attorney General to assist them in their questioning of Marie Stopes.

So there is a political/legal/governmental response. But what about the response of Christians and churches?

For a response to be a truly Christian response, it must be shaped by the Gospel. God has spoken two words, Law and Gospel. And our response should be rooted in both words. A purely Law response would just condemn the clinic. And unfortunately, it seems that many Christians respond with a purely Law response. If all our focus is on condemning the clinic and protesting, then we have heeded the Law, but what about the Gospel?

The Law tells us abortion is sin. And the Gospel tells us that there is forgiveness for sin. So a gospel-shaped response to an abortion clinic means, not only pointing to the reality of the sin, but also reaching out to those going through the clinic, as well as those working there, with the good news of what Jesus has done to save them from their sin.

Northern Ireland is changing. I'm seeing and hearing more and more comments from younger people who are put off by what they see of Christianity in the province. And what is it that puts them off so? Self-righteousness seems to be the dominant critique. And, if we have only a Law response to the abortion clinic, then what people are going to see is self-righteousness. The message that comes across is 'Look at these terrible people; we need to close this place down and get rid of them, as we're so much better.'

We're not better people; we're forgiven people. We are sinners saved by the grace of God in Christ Jesus, and we are to reach out to other sinners with His grace.

So, how can we respond? Instead of shouting out in condemnation, by reaching out with the love and compassion of Christ to those who need His salvation. In fact, that type of response might be a lot harder, but it's also the one that will save the most lives in the end.

And that's not to say that we just accept the inevitability of the clinic either. The Charisma writer perhaps spoke better than she knew, for it is time for our voices to be heard. But it's not so much on Great Victoria Street, nor in Stormont nor Westminster that our mournful voices need to be heard, but in the throne room of heaven. It's not a voice of protest that needs to be raised, but a voice of prayer. God is on the Throne, and He is our Father who invites us to come to Him in prayer and who lovingly answers our prayers.