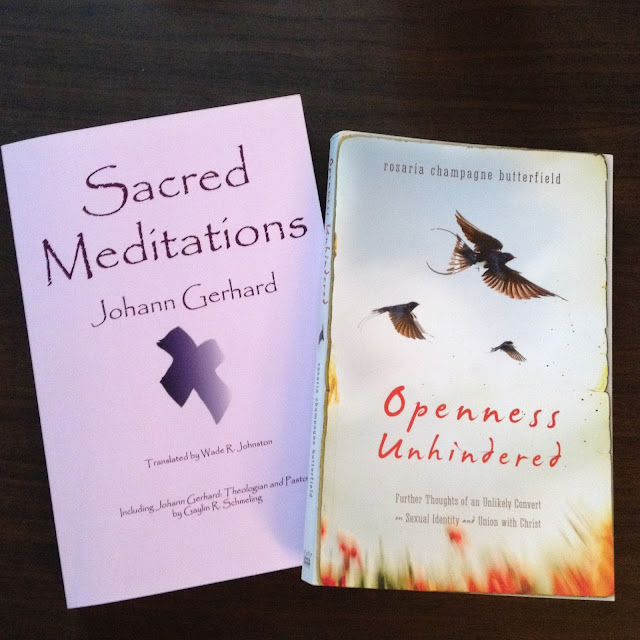 Since the beginning of this blog, I’ve kept the tradition of listing some of my favourites of the books I’ve read in the past year. Last year, partly due to doing a lot of writing (as in, a PhD dissertation and a rather large book) and partly due to personal circumstances, I didn’t read nearly as much as I would in a typical year, and a lot of my reading was dictated either by necessity or circumstances rather than choice. So, this year I’m not going to list ten books: I’m just going to tell you about the two outstanding books (one rather old and one rather new) which were far and away my favourite reads of 2016.

Don’t judge a book by its cover (for, if you did, you’d probably ignore this one, unless you’d already benefitted from reading something else by Johann Gerhard). You might have heard of Gerhard as the great theologian of post-Reformation Lutheran orthodoxy, but this isn’t a book by Gerhard the great scholastic; he wrote this one when he was a 23 year old theology student in 1603. Quickly it became one of the most popular devotional books in Europe and, although originally written in Latin, was soon translated into most European languages (including Welsh), and even Arabic. (Even though Lutheranism was non-existent in England, Gerhard was apparently the most popular devotional writer in England in his own lifetime.)

Anyway, this isn’t just a book for the 17th century, but one that’s just as vital today. I read it at quite a difficult time, and it did just what Gerhard intended, lifting up my eyes to Jesus and drawing me deeper into His incredible love. Gerhard starts off his Dedication to the book by comparing theology and medicine, and in this book by a very young theologian you will find true medicine for the soul. Each of the 51 meditations is only a few pages, so you don’t even need to be able to face a great deal of reading.

Older English translations from the 17th and 19th centuries are freely available (there’s even a recording of the whole thing in the 19th century translation on YouTube), but I’d recommend paying for the modern translation by Wade Johnson (Magdeburg Press, 2008; 2nd ed. 2011). This isn’t just my favourite book of 2016, but one of my favourite books of all time.


Openness Unhindered: Further Thoughts of an Unlikely Convert on Sexual Identity and Union with Christ by Rosaria Butterfield

Rosaria Butterfield’s first book, The Secret Thoughts of an Unlikely Convert (Pittsburgh: Crown and Covenant, 2012), told her story: the story of a postmodern, lesbian, feminist, English professor and LGBT activist who came to faith in Jesus Christ and, as she puts it in one of her books, became everything she used to hate.

In Openness Unhindered (Pittsburgh: Crown and Covenant, 2015), Butterfield takes up the concepts and terms involved in discussions of sexual identity and union with Christ. Some parts of the book are, of course, focused on the issues and questions of identity, orientation, and self-representation, while others have a much wider application – particularly the chapter on repentance. In fact, the chapter on repentance is probably the best contemporary discussion I’ve read of the ongoing role of repentance in the life of the Christian, responding to temptation, and the necessity of mortifying sin. Her discussion of the difference between admitting sin and confessing sin is worth the price of the book. Also, as a former literature professor, Rosaria Butterfield can write. Not only is the content of this book excellent, but she has such a way with words that it’s a joy to read as well. Of all the books I know on Christianity and homosexuality (several of which are excellent), this is far and away the best, as well as being the most unlike any other. Yet this isn’t just a book to get round to reading eventually; it’s a book to be read now!