Every Tribe and Tongue: On the Multicultural Church and the Liturgy 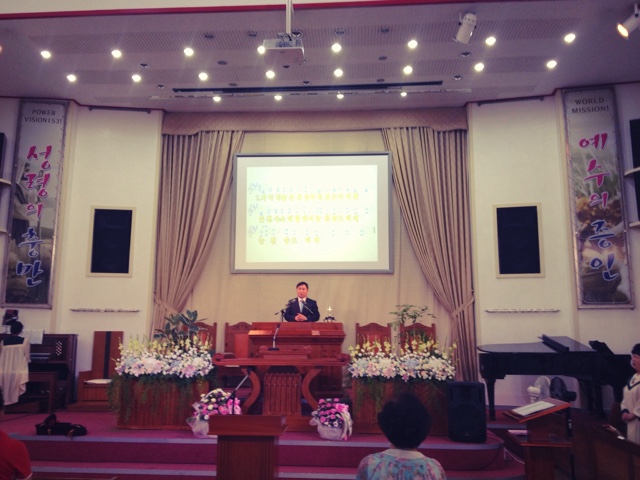 It's late, sometime in the night between Sunday and Monday, as I sit typing (awake from the time difference) on the other side of the world. This morning I was sitting in a pew as the choir sang, the organ played, and the pastor preached (not all at the same time!) in a language I don't understand. And yet, despite not knowing the language, most of the time I had a decent idea of what was going on: not just the general sense that this was a church service (from the surplice of the organist and choir, the music of the organ, and the furnishing of the building, with an Alpha and Omega on either side of some Hangul on the wall and its large Presbyterian pulpit), but the specific sense of what we were doing in worship. How? The liturgy.
Whether or not you speak Korean, you can recognise the elements of the liturgy and join in the worship of the church. From the responsorial readings, to the Gloria Patri, to the creed, to the pastoral prayer, to the great amen, to the sermon, to the benediction — while you might not always know what's being said, you do know what's happening, and, above all, what's very clear is that this is Christian worship. In fact, in a very different culture, it's one of the few times in the last few days that I have been able to recognise for myself what's going on, without needing someone else to explain.
So, over bulgogi, rice, bean sprout soup and rice cake, as the whole church gathered for lunch (as they do every Sunday) after the service, it got me thinking about the trans-cultural nature of the Christian liturgy. Church life outside the the liturgy is so culturally different. Even something so simple as fellowship over a meal means different food, different utensils, different sitting position (on the floor in Korea, anywhere but the floor in the UK), and different dress code (make sure you take your shoes off in Korea, but if you took your shoes off at a meal in the church in the UK, it would probably seem a bit eccentric). As we eat, we see our cultural differences. But in the liturgy we see that, irrespective of our differing languages and cultures, we are united together as the same Body in the same worship of the same Saviour.
For some reason the liturgy seems to get bad press among Western 21st century evangelicals. It often gets accused of being too narrow, and limiting to the church in her mission. And yet, the same liturgy that is accused of narrowness, is wide enough to embrace the Western church and the Korean church. And if you travelled to any other part of the world and any other culture, you'd find it there as well. All over the world, people from nearly every tribe and tongue read the Scriptures together, lift their voices to proclaim their faith in the words of the creed, pray together (as Jesus taught us) with the words of the Lord's Prayer, and ascribe glory to the Father and to the Son and to the Holy Ghost, as it was in the beginning, is now, and ever shall be. All over the world, in nearly every tribe and tongue, pastors preach, elders pray pastoral prayers, and ministers pronunciation the benediction. All over the world, in a myriad of tongues, the Words of Christ are spoken over bread and wine as the church partakes of Christ's body and blood in the sacrament. All over the world, there are few (if any) things which transcend culture to the same extent as the liturgy of the Christian church.
Far from being narrow and limiting, the liturgy is wide and all-encompassing, all-welcoming. I've not only experienced it abroad, but seen it with visitors to my own church at home. Christians, who have newly arrived in a country whose language and culture is far different from their own, on their first Sunday visit a strange church in a strange tongue. Things are bit overwhelming, and communication might be a struggle, but then, all of a sudden, they recognise the creed, or the Lord's Prayer, or the Words of Christ at the Table, and anxious faces turn to smiles. In a strange and foreign land we suddenly recognise that we are at home, that we are part of the family, that we can worship Christ, not only in the same building at the same time, but together, united. The liturgy is not a needless barrier, but an open, and welcoming door.
(Could it be that it is not the liturgy of the church that's narrow and culture bound, but rather the new Western anti-liturgical "contemporary" liturgy?)
One day the saved from every tribe and tongue will gather around the throne of God and of the Lamb, with angels and archangels and the whole heavenly host, united together in the heavenly liturgy (Rev. 4-5). In the meantime, while the liturgy of the church on earth may not have the same perfection as the liturgy of heaven, it's a good thing to lift our voices together with them, and with our brothers and sisters from all sorts of cultures all over the world, saying together, "Holy, Holy, Holy, Lord God of Hosts; heaven and earth are full of Your glory!"
Labels: church liturgy random musings worship