When Good Friday falls on the Feast of the Incarnation (which won't happen again until 2157!) 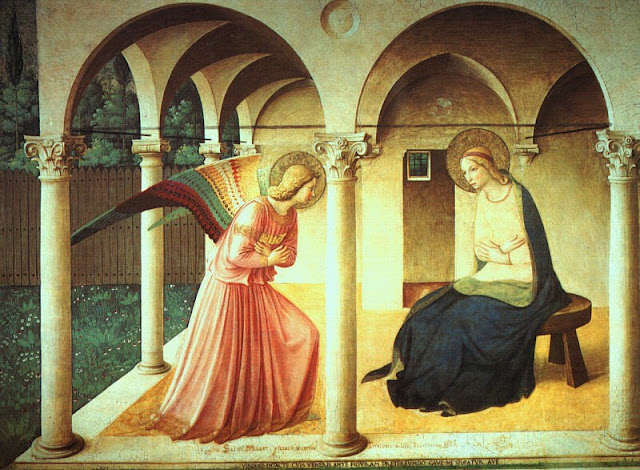 Something amazing happened this year. Good Friday fell on the 25th March. It won't happen again until the year 2157, but when it happens it's a fantastic collision of dates. Why? Well, think about it for a moment. What comes 9 months after 25th March? Why, Christmas of course: the feast of the birth of Christ. So, 9 months before Jesus was born, what happened? The Word became flesh! (The Incarnation didn't begin with Jesus' birth, but with His conception in the Virgin's womb.) So 25th March is the feast of the Annunciation, a day to celebrate the Incarnation of Christ.

In early church , people like Tertullian said that the 25th March was the actual date of the crucifixion. Now, scholars have all sorts of debates over what dates were possible for the crucifixion, but 25th March was the earliest date anyone gave (and that was even before the date of Christmas was fixed, so it wasn't influenced by that). Later the church would point to 25th March not only as the date of the crucifixion and the annunciation, but also of the creation and fall of Adam. How appropriate would it be for the Lord to redeem mankind from the Fall through both the Incarnation and the Cross on the very same date as Adam fell! (Although how anyone could work out the date of Adam's fall, I have no idea.) And because it was so fitting for the Incarnation and the Cross to converge on the day of the fall, the church eventually ended up celebrating 25th March as the day of all the great foreshadowings of the Cross from the Old Testament, like the exodus (well, Jesus was crucified at the time of the Passover) and Abraham's offering of Isaac.

Alas, we won't have such a wonderful convergence of dates again until 2157 (or never again, if the Archbishop of Canterbury, the Patriarch of Alexandria and the Pope fix the date of Easter!). Yet, in the meantime, we celebrate the Incarnation and the Cross together each and every Lord's Day as we gather around the Lord's Table.


And finally I leave you with the first half of John Donne's poem from when the two collided in 1608.

On Annunciation and Passion Falling on the Same Day. 1608.
by John Donne

TAMELY, frail body, abstain to-day ; to-day
My soul eats twice, Christ hither and away.
She sees Him man, so like God made in this,
That of them both a circle emblem is,
Whose first and last concur ; this doubtful day
Of feast or fast, Christ came, and went away ;
She sees Him nothing, twice at once, who’s all ;
She sees a cedar plant itself, and fall ;
Her Maker put to making, and the head
Of life at once not yet alive, yet dead ;
She sees at once the Virgin Mother stay
Reclused at home, public at Golgotha ;
Sad and rejoiced she’s seen at once, and seen
At almost fifty, and at scarce fifteen ;
At once a son is promised her, and gone ;
Gabriel gives Christ to her, He her to John ;
Not fully a mother, she’s in orbity ;
At once receiver and the legacy.
All this, and all between, this day hath shown,
Th’ abridgement of Christ’s story, which makes one—
As in plain maps, the furthest west is east—
Of th’ angels Ave, and Consummatum est.