The Red Herring of ‘the Aroma of Rome’ 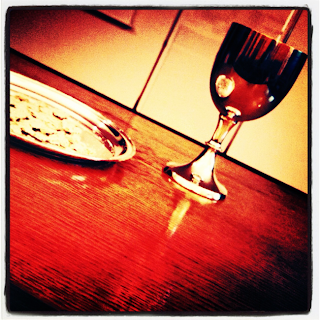 At Council last week a friend was accusing me (in jest, he assures me) of ‘the aroma of Rome’ in my presentation of the doctrine of the Lord’s Supper. And when it comes to the Lord’s Supper, there’s nothing British evangelicals fear more than the aroma of Rome. The Protestant Reformation roundly rejected Rome’s doctrine of the sacrament, with its concept of the mass as a propitiatory sacrifice for the living and the dead, its withholding of the cup from the laity, and its hiding of Christ’s Words of Institution. To the 21st Century evangelical mind, however, the ‘Roman’ doctrine tends to be simplistically reduced to one word: ‘transubstantiation’!

Just before he died, D.P. Williams warned the Apostolic Church of the danger of this red herring. His worry was that over-caution ‘in trying to avoid the false assertions of the theory of transubstantiation as put forward by Roman Catholicism’ would mean that we ‘failed to grasp the truth’ of true communion with Christ in the sacrament. The danger of such a fear is that we miss the true ‘mystical union of eating His flesh and drinking of His blood’ which is what ‘we can and should by faith experience, and by that communion be made partakers of the Living Christ.’

In other words, the fear of the aroma of Rome is a red herring that distracts us from the reality of the presence of Christ in the Breaking of Bread. We can end up so over-cautious in how we speak of the sacrament that we only speak of it in negative terms of what it is not, and miss the positive of what it actually is. It’s not transubstantiation, but it is the true body and blood of Christ. As D.P. Williams put it, at the Table we feed upon ‘the Unblemished Lamb who has been sacrificed for us’, Christ our Passover, and derive ‘from Him the blessings of our redemption.’

But was this purely an idiosyncratic view of D.P. Williams? Not at all! Pastor Dan’s co-worker in Penygroes, Thomas Davies, also writes of how Christ’s ‘Sacrifice becomes our paschal Food; [His] bloody Cross our well belovèd Board.’ When ‘lovingly the Apostle’s fingers brake the bread’ and ‘all in reverence partake’, then Christ’s ‘sinless Flesh is bruised to our view.’ And this real presence of Christ is linked with Christ speaking through the words of institution pronounced by the minister at the Table. As the congregation hears His Words ‘broken for you’ proclaimed, Christ Himself is speaking, saying to them ‘This have I done for you!’

Nor was this understanding of the sacrament confined to the Welsh section of the Apostolic Church. Andrew Turnbull, the leading apostle of the Apostolic Church in Scotland, writes of a Breaking of Bread service in Northern Ireland in 1924 at which the Lord ‘shewed forth His power in a marvellous way’. Turnbull explains the great power of Christ at the Breaking of Bread through the real presence. ‘Truly Christ has come in the flesh, at one word from Him by His Spirit.’ Again we see the connection between the real presence and the Words of Institution, as well as the connection of the Words of Institution and the work of the Spirit which D.P. Williams also wrote about. Furthermore, when Christ is present ‘in the flesh’ at the Breaking of Bread, then ‘devils cried out and fled, bodies were healed, and many saved.’

But the real presence was not only the Apostolic understanding of the Breaking of Bread in Wales, Scotland and Northern Ireland. We also see strong evidence for it in England. A hymn written by a certain ‘H.M.S.’ from the Albert Street assembly in Bradford refers to Christ’s ‘precious Body broken’ and to His ‘Blood Most Holy’ at the sacrament. The final stanza of the hymn is a clear affirmation of the real presence (even almost bordering on Eucharistic adoration!):

Oh Broken Body of the Lord,
Oh Food and Drink most precious;
Until He come, beloved, adored,
Oh may we dwell with patience.

George Perfect, ordained as a teacher in the Body of Christ in Bradford, and later called as an apostle and sent as a missionary to Nigeria, wrote of how we ‘meet our risen Lord’ and feast on Him, the Word, in the Breaking of Bread. The bread which we eat in the sacrament is ‘the Bread of Heaven’ which ‘God has given to mortal men.’ The wine which we drink is ‘His blood [which] cleanse[s] from every stain.’ Perfect also connects the presence of Christ with the Words of Institution: it is through ‘His Word of power and grace’ that we meet with Christ face to face in the sacrament.

Nowadays, words like ‘symbol’ get liberally sprinkled throughout any talk of the sacrament, like antibodies to fight off the infection of the aroma of Rome. But could it be that an oversensitivity to the aroma of Rome accidentally leads to an autoimmune response where we end up turning against our own historic (and very Protestant) doctrine of the sacrament? No Apostolic has to share the doctrine of D.P. Williams, Thomas Turnbull, George Perfect and Tom Davies on the Breaking of Bread (the Tenets only commit us to understanding it as a sacrament rather than an ordinance without defining a particular understanding of Christ’s presence). But neither can anyone dismiss a view held by many of the most significant founding apostles of our movement as ‘the aroma of Rome’. It’s not Roman; it’s Apostolic!
Labels: Apostolic Church doctrine sacraments Tenets theology