The Almighty Power of the Crucified 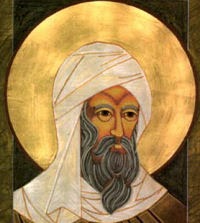 The worship of demons then has ceased: creation has been sanctified by the divine blood: altars and temples of idols have been overthrown, the knowledge of God has been implanted in men’s minds, the co-essential Trinity, the uncreate divinity, one true God, Creator and Lord of all receives men’s service: virtues are cultivated, the hope of resurrection has been granted through the resurrection of Christ, the demons shudder at those men who of old were under their subjection. And the marvel, indeed, is that all this has been successfully brought about through a cross and suffering and death. Throughout all the earth the Gospel of the knowledge of God has been preached; no wars or weapons or armies being used to rout the enemy, but only a few, naked, poor, illiterate, persecuted and tormented men, who with their lives in their hands, preached Him Who was crucified in the flesh and died, and who became victors over the wise and powerful. For the almighty power of the Crucified was with them. Death itself, which once was man’s chiefest terror, has been overthrown, and now that which was once the object of hate and loathing is preferred to life. These are the achievements of Christ’s presence: these are the tokens of His power. For it was not one people that He saved, as when through Moses He divided the sea and delivered Israel out of Egypt and the bondage of Pharaoh; nay, rather He rescued all mankind from the corruption of death and the bitter tyranny of sin: not leading them by force to virtue, not overwhelming them with earth or burning them with fire, or ordering the sinners to be stoned, but persuading men by gentleness and long-suffering to choose virtue and vie with one another, and find pleasure in the struggle to attain it. For, formerly, it was sinners who were persecuted, and yet they clung all the closer to sin, and sin was looked upon by them as their God: but now for the sake of piety and virtue men choose persecutions and crucifixions and death.

Hail! O Christ, the Word and Wisdom and Power of God, and God omnipotent! What can we helpless ones give Thee in return for all these good gifts? For all are Thine, and Thou askest naught from us save our salvation, Thou Who Thyself art the Giver of this, and yet art grateful to those who receive it, through Thy unspeakable goodness. Thanks be to Thee Who gave us life, and granted us the grace of a happy life, and restored us to that, when we had gone astray, through Thy unspeakable condescension.