It's Father Christmas' Day! A Day for High Christology and Punching Heretics 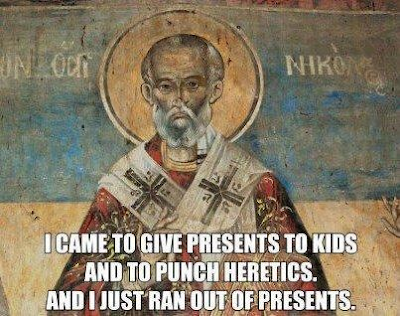 A repost from this day last year.

Today is St. Nicholas' day. If you're in Belgium, or many other countries for that matter, you'll be putting out your shoes on the doorstep to be filled with presents from the good saint. Now, in English-speaking lands you may know St. Nicholas better as Father Christmas or as Santa, but back in his youth, before he moved to the North Pole and discovered the wonders of travel by reindeer, he was a Turkish bishop.

Back in the days of Nicholas' bishopric, there was a Council. Now this Council was not quite like our May Council, for it's a Council that's effects are still being felt today, 1687 years later! Anyway, at this Council (called the First Council of Nicea by the way, and hugely important), there was another chap (actually there were rather a lot of chaps, but we'll just stick with those who are relevant to our Father Christmas gone wild story), and this chap was called Arius. Nicholas was merely a bishop, but Arius was a celebrity worship leader. It seems Arius was good at writing a catchy tune. He was also good, however, at being a heretic, and used his popular songs to spread his heretical teachings.

And so, there was a Council at Nicea. And the Arian heresy was one of the major topics of discussion. At the Council, Arius, along with a large number of supporters, tried to defend his position. Now, the story goes (although it isn't included in the records of the Council, though neither do they tell us that it didn't happen), that while Arius was speaking, Nicholas got so incensed with his blasphemy that he got up and punched/slapped him in the face. (1687 years later, it's not quite clear if it was a punch in the nose or a slap in the face - after a millennium and a half it's not surprising that such details are fuzzy!)

Now, of course, slapping/punching people isn't quite what's expected of a bishop, so Nicholas got into a bit of bother. Quite a bit of bother in fact. He was stripped of his bishopric and put in prison. But that's not the end of the story.

For during the night in prison Christ (possibly along with Mary and Joseph) appeared to Nicholas in a dream, asking him why he was in prison. 'Because of my love for you', said Nicholas. In the dream Christ restored Nicholas to his bishopric and gave him a copy of the Scriptures. When he woke, there was the copy of the Scriptures. When the other bishops gathered in the morning, they had all had a similar dream that Nicholas was defending the truth about Christ and should be restored to his bishopric. And so Nicholas was released from prison and returned to the Council.

Why did Nicholas punch Arius? Because he cared passionately about Jesus. Arius was telling lies about who Jesus was and downgrading Christ's glory; Nicholas couldn't stand for that. St. Nicholas loved Jesus and points us to the importance of passion for the truth about Christ. We might not be going round punching heretics, but we should still be passionate about speaking the truth about Christ and giving Him His rightful glory. 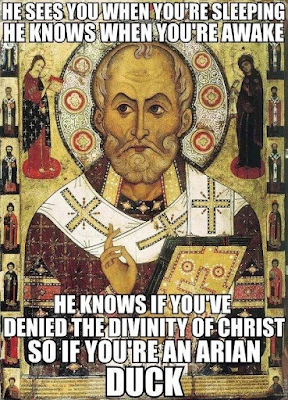