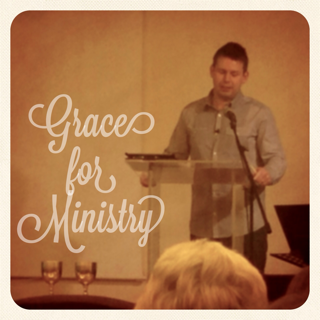 A few weeks ago I was writing a lot about the nature of grace. My whole point was that grace isn’t some THING that we get from God, but rather, grace is Christ and Him crucified. So getting grace means getting Jesus. Now that’s all very well when it comes to salvation, but what about when it comes to ministry? Surely grace for ministry is a THING we get from God. Well, no. If it was a different thing, God would use a different word. The Bible could have talked about power for ministry or something else like that, but instead it talks about grace (Rom. 1:5; 1 Cor. 3:10; 1 Cor. 15:10; Eph. 3:7; 1 Pet. 4:10-11). Just as we’re saved by grace, we serve by grace. And it’s the same grace which saves and which ministers: Jesus.

And that’s the way the Bible talks about Him too. Not only is Jesus the Saviour, but He’s also the Minister. He is the apostle (Heb. 3:1), the prophet (Acts 3:22-23), the evangelist (e.g. Luke 4:18,43 where the verb is used of Jesus), the pastor (1 Peter 2:25; 5:4; Rev. 7:17) and the teacher (e.g. Matt. 26:18). So apostles, prophets, evangelists, pastors and teachers only minister as Christ ministers through them. And not only does He minister through them, but He’s also the substance of that ministry; they’re Word ministries and He is the Word. Christ is the minister and Christ is the ministry. So it’s impossible to minister without Him.

When we minister through grace, we minister through Jesus. When we minister grace, we minister Jesus. So ministry by grace is ministry in union with Christ.
And that means union with Christ also in His suffering (see 2 Cor. 1:5; Rom. 8:17; Phil. 3:10-11; Gal. 6:17; 2 Cor. 4:7-12). Jesus, whom we recognise in His beauty and glory displayed through His Cross and Resurrection, is the One who was ‘despised and rejected by men, a Man of sorrows and acquainted with grief’ (Isa. 53:3). The Victorious King to whom we’ve been united is the King who was despised and rejected.

Now, of course, we’re not Christ. And so, we’re not perfect. Some of our grief and sorrows, some of the despising and rejecting, we bring upon ourselves by our own sinful mistakes. Yet that doesn’t mean Christ lets go of us. No. We know forgiveness and reconciliation through His shed blood. We have been united to Him and we minister in union with Him. That’s His grace for ministry – He gives us Himself.

(P.S. Don't blame Mark for anything I've said. It just happened to be the best picture of ministry I had - Word and Sacrament together)
Labels: grace Jesus ministry Theology of the Cross