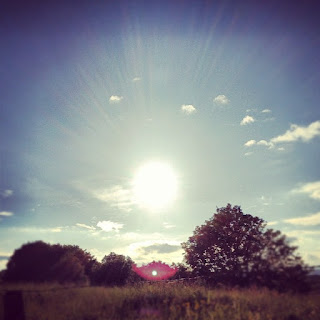 All week we've been looking at the Ascension of Christ and seeing some its implications beyond merely a change of location. And today we've come to the fifth and final post in the series. So far we've seen that, as a result of His ascension, Jesus arrives, Jesus receives, Jesus gives and Jesus ministers. So what is the fifth and final point?, I hear you ask. Well, here goes:

Jesus had already spoken to His disciples about the ascension even before He was crucified. And this was one of the things He had told them.

Look at Jn. 14:3. As soon as Jesus has told them that He's going to prepare a place for them, He goes on to tell them that that means He's coming back for them. Jesus' Ascension is the guarantee of His return! If He wasn't going to come back for us, there'd be no need for any prepared place. But, Jesus is coming back, and not just returning, but coming to receive us to Himself so that we'll be with Him forever. The Ascension assures of that truth.

After all, when the disciples saw Jesus ascend, what did the angels tell them?:

'This same Jesus, who was taken up from you into heaven, will so come in like manner as you saw Him go into heaven.' (Acts 1:11)