I've just got back from a holiday in the UK, but while I was there I was slightly surprised to see that liturgical developments in the Church of England had made it onto the front page of The Times. 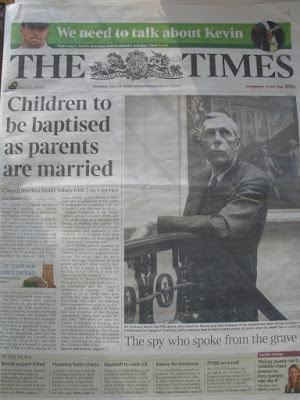 If you're in the UK then I'm sure you've heard about this already (given that it was front page news), otherwise you can read the Times main article here. As I was driving along I also heard a discussion with two Anglican bishops on the matter on Radio 4's PM. Not being Anglican and not believing in the paedo-baptism (the baptism of babies), I'm not going to say anything about the liturgy itself. However, what did interest me in the coverage was the theological thought which had gone into arguments on both sides of the debate. The Anglo-Catholic response was that the sacrament of Baptism should not be detached from the Sunday act of worship. They argue that the act of baptism should be seen as the child being received into the church and so should occur when the church is gathered for worship rather than at a private ceremony (as it would be if combined with a wedding).
Now, most Pentecostals probably couldn't care less about Anglo-Catholic thinking on baptism, but may I dare suggest that these Anglo-Catholics may be on to something. You see, they're argument is essentially that baptism is not all about the person being baptised, but rather about God's work. Baptism is an act of worship and should speak to the entire church (not just those being baptised) of our being buried with Christ in baptism and raised with Him to newness of life.
Now, I'm sure by this point my thinking and that of the Anglo-Catholics have parted company. They would no doubt view the link between baptism and God's work in a different way. Yet the liturgical point remains, baptism should be a churchly event, not a private ceremony.
All very well and good, I hear you say. After all, we Pentecostals are not much given to private baptisms. But what about the rest of the Anglo-Catholic point: that baptism should be performed in the context of the Sunday worship service. Does it really matter what day of the week people are baptised?
No it doesn't. In the book of Acts they did not wait for the next Lord's Day for baptisms. Then again they tended to baptise immediately upon profession of faith and we don't really do that nowadays, do we? Yet the point remains, biblically a valid baptism may be performed on any day of the week. So that's that. Or is it?
A few months ago this issue came up in our presbytery. How? Simply by the fact of having to schedule a baptism. Traditionally in our assembly baptisms had taken place on a Sunday afternoon. We decided to abandon tradition.
We had the baptism on a Sunday morning. We had the baptism at our Breaking of Bread service. Not because we thought it had to be so, but rather because it fit well theologically. The whole church could be present for the baptisms and our candidates could first be baptised and then partake of the Lord's Supper. First the sacrament of the beginning of the Christian life and then the sacrament of the continuation of the Christian life. So the Word and the 2 sacraments came together and the sacraments in the appropriate order. Like the Anglo-Catholics, a little theological reasoning went into our approach.
Now, I'm not at all saying that this is the only appropriate time for a baptism. Next time we might do it differently. There's nothing wrong with a Sunday afternoon; Sunday morning just seemed a bit more appropriate. In my assembly back home we usually had baptisms on a Saturday evening (maybe it's like that everywhere in the UK, I'm not sure) which would also be rather appropriate (providing the congregation will come out on a Saturday evening) and would still preserve the symbolic order of the sacraments.
Of course the Bible does not specify that baptism must precede the Lord's Supper, nor does it specify a particular day of the week. In fact, from the example of the Ethiopian eunuch we cannot even rule out private baptisms in particular circumstances. Our theological reasoning must never overrule Scripture. However, when making practical decisions (like scheduling baptisms) a bit of theological thinking should go hand in hand with our practical thinking. After all, theological thinking at the end of the day is simply thinking based on what the Bible says, so if the Bible is our authority, then theological thinking is quite useful.
Labels: church random musings sacraments theology