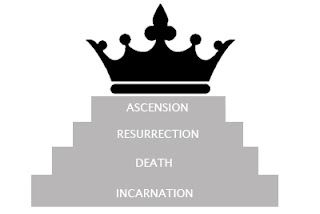 Last Thursday probably passed most people by quite unnoticed. In the UK thoughts were probably drifting towards Bank Holiday Monday and the long weekend. In Belgium Thursday itself was the Bank Holiday, so I spent the day driving from Brussels to Wales.

Most evangelicals today retain the old High Holy Days of Christmas and Easter. Afterall, they celebrate events which are theologically very important to us as evangelicals. Special reminders of the Incarnation and Resurrection of Christ serve a good purpose. Many Pentecostals have a vague idea of Whitsun (or Pentecost for any Americans out there). In the UK Whitsuntide has traditionally been a time for Conventions in various parts of the country among the Apostolics. (In fact in the early years it was the time of year for one of the four big annual conventions: Glasgow at New Year, Bradford at Easter, Hereford at Whitsun, Penygroes in August). In Belgium we'll be having our annual National Convention next weekend for Whitsuntide.

Ascension Day, however, is the poor cousin of High Holy Days among evangelicals and Pentecostals. For a start it falls on a Thursday, so unless you live in a traditionally Roman Catholic country (like Belgium), it's probably not a day off work. Thus it goes by like any other Thursday of the year.  Furthermore, the Ascension, although believed and confessed, is not really talked about all that much among our ilk. Afterall, when was the last time you heard a sermon on the Ascension? How many books are there in your local Christian bookshop on the Ascension? How many of our choruses (or am I supposed to call them worship songs nowadays?) even make mention of the ascension? Or how many of our hymns for that matter?

So what's the big deal, you ask? Well, quite frankly, the lack of attention to the Ascension would appear to imply that it's not really all that important to us. We seem to limit the Ascension to a mere geographical movement. Yes, Christ did physically change location, but that is not the full import of the Ascension. The Ascension, in Scripture, is of great theological significance.

In the Apostolic Church, the Ascension has (historically) been of great importance to our theology. In fact, without the Ascension, our Apostolic distinctives would disappear. As a result the Ascension has, perhaps, been talked about a bit more by us that among some other circles. Yet, just because we talked about it a lot in the past, doesn't mean we can stop talking about it today. So, over the next few days, we'll have a wee look at some of the theological significance of the Ascension of Christ.