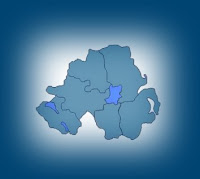 As a Northern Ireland Evangelical I'd like to offer a few comments of my own.  Firstly, I think a comparison with the rest of the UK would be more helpful than a comparison with a different country .  According to Operation World, 8.5% of the British population are evangelicals. That means that there are significantly more evangelical Christians in Northern Ireland than the rest of the kingdom.
Also, the 12% figure actually marks a decline in the evangelical population in Northern Ireland which not that many years ago stood at about 18%. Northern Ireland has experienced major economic growth in recent years. Before we used to say that we were 20 years behind the mainland (England, Scotland and Wales) in social terms; today that difference is minimal. Northern Ireland is fast catching up with the more socially liberal mainland society.  In fact, the government seems to like using Northern Ireland as a testing ground for the introduction of some radically liberal new laws, before daring to implement them in the rest of the UK. Churches are finding it increasingly difficult to recruit new ministers and Northern Ireland's long heritage of support for missionaries seems to be going into decline. This article from the Evangelical Times (June 2007) has a bit more on the decline. One scary quote from the Evangelical Times article states that 'Northern Ireland is facing, for the first time in its history,  an unchurched generation.'

Despite the decline, Northern Ireland still has the largest church-going population in western Europe. (Here in Belgium the evangelicals are less than 1% of the population!) In fact, according to Operation World, 'within a 50km radius of Belfast is one of the highest concentrations of evangelical churches in the world.'  So there is much to thank God for. Yet there is also much to pray for.
Labels: church Northern Ireland